City Siege 3, Jungle Siege, is the third installment in the popular City Siege series. The game is a Flash based game that gives you command of up to five soldiers to complete missions. The game itself is a side scrolling action game, a mixture of Cannon Fodder (tiny men, guns, kill all enemies) with side-scrolling platform games like Green Berets for the C-64.

You start with a poorly equipped soldier with options to purchase additional soldiers once you have completed your first missions. Soldiers are moved around with WAD, the mouse is used to aim and fire.

Mission objectives are displayed on the screen before a map starts. You'll encounter bad guys, civilians and stars in most maps. Bad guys need to be eliminated, civilians and VIPs rescued and stars collected. Rescuing civilians results in additional money for successfully completing the mission, and stars are used to upgrade your troops. Each soldier has a distinct weapon, some of additional abilities. This ranges from commandos who shoot a lot faster than your average soldier over spies that can avoid detection to jeeps or rocket launchers. Some soldiers may be more effective than others in certain levels. The Jeep for instance can pack a pound, but cannot nearly jump as high as the commando. 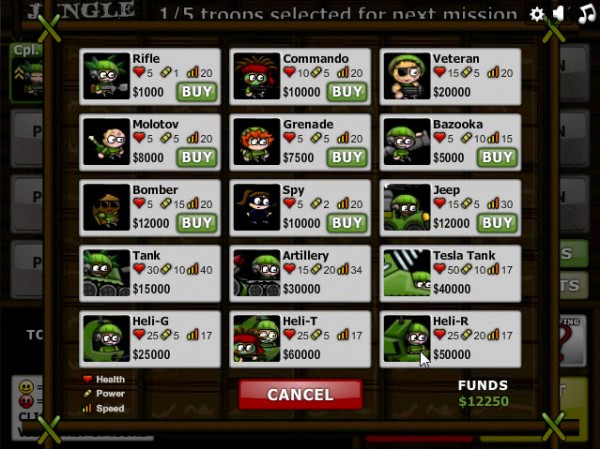 Each unit has a health, power and speed rating associated with it.

Soldiers that die in combat cannot be revived. This is exactly the Cannon Fodder mechanic that leaves you with inexperienced troops once your elite units die. The experience point system is basic at best. You can award points to soldiers who get higher ranks and more hitpoints in return.

Only one soldier can be controlled at a time. You can switch between soldiers of your squad with the 1-5 keys or a click on the individual unit. There is no option to control multiple soldiers at once.

City Siege 3 Jungle Siege is a nice game. It is not overly complex though and may bore experienced players after a while. You basically need to move your units from left to right all the time, kill every enemy you see and collect civilians and stars when you encounter them.

The upgrade system itself is mediocre at best. It would have been more plausible if units would get experience for combat missions or actions.

Playing around with the different unit types may keep you entertained for a while though. Collecting enough money to do just that on the other hand is again pretty boring, especially in the beginning.

Gamers who are looking for a side-scrolling action game that is not overly complex can play a round over at Armor Games.