Nothing beats playing board games with a couple of friends as it is usually lots of fun. Sometimes though you fancy a game but do not have enough friends or space available to play the game locally. That's where online games come into play.

Settlers of Catan - original Die Siedler von Catan - is one of the most successful board games of all time. Players who are interested in playing Catan online can do so at Play Catan, the official Catan game portal on the Internet.

Registered users can play the core Catan game against the computer or human opponents. Core game in this regard means the original board game without any expansions. Paid account are available that enable access to expansions like Cities & Knights, Seafarers or Catan the card game, as well as tournaments and other games by the Catan designer Wolfgang Teuber.

The Catan board game can be played online on the Play Catan website, or offline in one of the game clients. Catan game clients are available for Windows, Linux and Mac operating systems.

The online client requires Oracle's Java Runtime Environment. It is suggested to make sure that the latest version of Java is installed on the system to avoid issues with the game.

Free account players can only create and join basic online games. This is done in the channel browser. Only basic games are listed for free players here. You can join games with a click on an open game in the list and the selection of join from the controls at the bottom. Please note that you need to click on Start when you are ready. 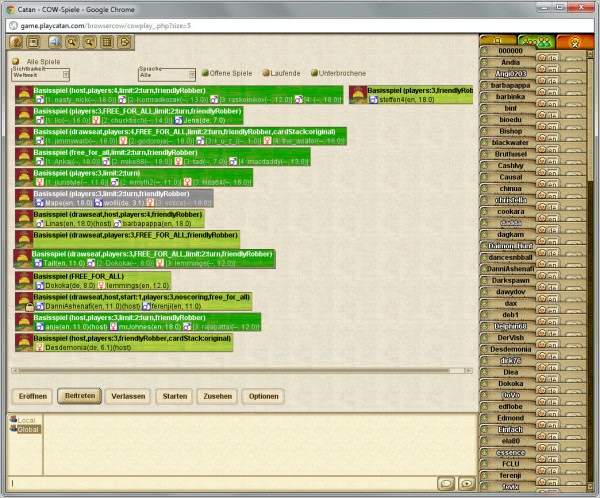 Games can be password protected which can be helpful if you want to play a friends only game. The game interface looks nice and clean. 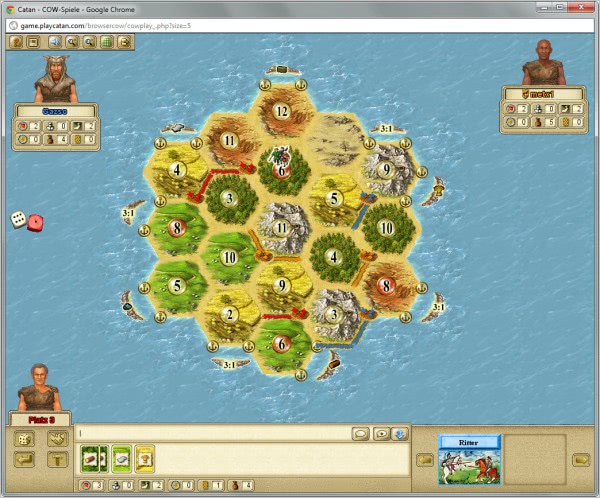 The game begins with the settlement placement phase. Each player places two settlements and two roads on the screen. Players who have played the board game before know what to do as it plays exactly the same. Let me quickly walk you through the rules of the game.

The goal of the basic game is to accumulate 10 victory points before anyone else does. You get victory points for settlements (1), towns (2), the longest road (2), the strongest force (2) and victory point cards that you can draw (1).

Each turn begins with the role of the dice. The number corresponds to numbers on the board. You get resources if you have settlements or towns adjacent to board regions with that number. Players who roll a seven can move the robber and draw a resource card from a player who has a settlement or town adjacent to it.

You get one resource type for each settlement and two for each town (unless the robber is placed on it). You can then use the resources to build or buy. You can build roads and settlements, upgrade settlements to towns or purchase cards. Cards benefit the player drawing them. They can give the player a hidden victory point right away, allow the player to build two roads when the card is played or move the robber around by playing a knight card.

The active player can trade resources with other players. This is one of the key elements of the game, especially during the early stages of the game when players do not get lots of resources due to a lack of settlements and towns.

Players can also trade resources with the bank. Four resources of a single type can be traded against any other resource. Towns at harbor locations reduce the trade ration to 3:1 or 2:1 for a particular resource.

And that's the game. It is easy to learn and play once you get the hang of it.

Game strategy depends largely on the initial map setup and placement of first settlements. It is obviously beneficial to place the settlements next to three adjacent regions that yield resources. Probability plays a role as well, as certain numbers will statistically be rolled more often than others (lowest are 2 and 12 at both ends, highest resource wise are 6 and 8 which are indicated with a red color on the map).

Placement of settlements and roads can also prevent expansion of another player, as it is essentially possible to block a player this way.

Play Catan is a true to the original board game version of Settlers of Catan. Have you played Settlers before? If so, what's your opinion?