While Google Translate is probably the most popular online translation service, there are others that may be less popular but are often equally good when it comes to translating contents into other languages.

Microsoft's Translation service is without doubt not as popular as Google's service. The service is available over at Microsoft Translator. It works pretty much as Google Translate works. The translation service auto-detects the original content language and offers to translate it into one of the supported languages.

Users can enter text or website addresses at the translator site to get the textual contents translated.

Microsoft has released a bookmarklet for their translation service recently that everyone can use to translate web contents on the fly. The bookmarklet is available on this page.

You first need to select the language that you want the original text to be translated to. The pulldown menu lists many languages, from English and German to Spanish, Portuguese or Japanese.

You then need to drag and drop the bookmarklet to your browser's bookmark's bar or bookmarks. You can alternatively right-click the link on the Translator Bookmarklet page to bookmark it this way. Depending on the frequency of use, you may want to place it prominently in the browser. 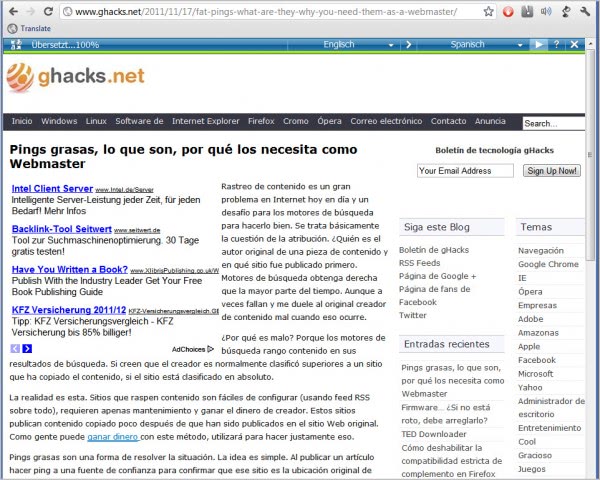 A click on a language displays a selection menu where it can be switched to another language. That's handy if the automatic language detection did not detect the correct language used on the page, or where you may want the text to be translated into a different language.

The original text on the page is displayed whenever you move the mouse over a translated sentence.

Microsoft's Translator bookmarklet is a handy tool for users who need to translate web contents regularly. Google is also offering translate bookmarklets for their Google Translate translation service. (via)

Previous Post: « HTC Titan Windows Phone Review
Next Post: « How to get your Microsoft Office Files to Open after Office 2010 Trial Expires in Windows 7