I've used a lot of Windows Phone handsetsÂ since the platform was first released a year ago so you can imagine that I was a little sceptical about the new HTC Titan because of it's near 5 inch screen.Â  Dell's 5 inch touchscreen device is marketed as a tablet after all and, as the Titan comes with the same 480 by 800 resolution of other Windows Phones would it just be a big and unwieldy phone?

Firstly let's look at the internals.Â  There's a 1.5GHz processor and 512Mb of RAM running the thing, but the specifications are good.Â  To start with there's a healthy 16Gb of RAM, though like other Windows Phones it's non-upgradeable and an excellent 8MP camera with dual-LED flash.Â  All the extras you'd expect from a modern smartphone are there too with a range of sensors and other gadgets.

That screen too is excellent.Â  While not quite as bright as other Windows Phones it's clear and easy to read even in direct sunlight.Â  Then comes the overall build quality.Â  I was a bit concerned about the back which has a section at the bottom which looks like it slides out and unclips to provide access to the battery and SIM card slot.Â  In fact it doesn't and trying to force it could break the back of the handset.Â  Instead there's a small clip that enables the entire back of the phone to come away.Â  I'm not convinced about how wise this is but the clip is solid and doesn't look prone to breakage.

The front of the phone is almost all glass from edge to edge and it's truly luxurious to behold if not hold.Â  At 131.5mm x 70.7mm x 9.9mm and 160g it's big and bulky.Â  It's a stretch for even my hand to hold and grip firmly and you'll certainly notice it in a pocket.

You might find it odd then to hear that I absolutely love this phone.Â  Scaling up the operating system by around 30 or so percent brings new levels of clarity and usability to it.Â  All of a sudden things like the on-screen keyboard work properly almost all of the time, and everything else becomes much clearer to read and see.Â  There's no pixelation at all in fact and the screen is almost crystal sharp.

So who might want the HTC Titan?Â  Well if you want a phone to keep in your jeans pocket then stay away otherwise you'll look like you've got a stiff leg when you walk around.Â  There are a great many people for whom this phone is brilliant.Â  For starters there are people who want a proper PDA replacement.Â  With the full integration of Office and SkyDrive into Windows Phone with the new update, which is pre-installed, this phone is almost perfect for this role. 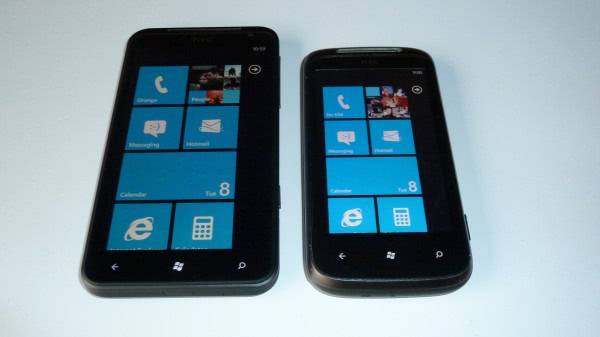 There are also people who may have motor or vision problems and who would carry their phone around in a bag anyway.Â  This is a huge market and if you're one of these people you can be reassured there'll be no squinting at this phone to read tiny text.Â  In fact for these groups of people I believe that the HTC Titan is a great introduction to smartphones and a product that very neatly and effectively fills an important hole in the Windows Phone market.

So overall I can safely say the HTC Titan won'tÂ suit everybody's needs, but for those people it helps, it will be a tremendous help indeed.