Game cheats and cheat codes have been very important for previous gaming generations. They were highly popular before the Internet became popular. Game magazines back then filled a lot of pages with walkthroughs, tips, tricks and cheat codes. Today with Internet access almost everywhere, there is no need for offline access to game cheats. All it takes is a search on the Internet to find all the information you need for practically any game ever created.

Sometimes though you may require offline access. Maybe you have decided to play some older games on your laptop on holiday and know that you won't have Internet access there. The Cheatbook Database is a free constantly updated cheat codes collection for the Windows operating system. The developers release a new version of the software once a year to keep up with recent game releases.

When you first start the software you see a large listing of available game titles in the left sidebar. A search at the top can be used to find cheats for specific games. 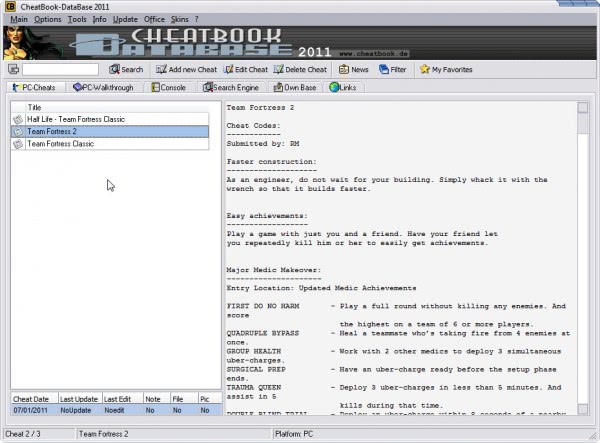 Each cheat is listed with a date, last update and other information. The game cheats are listed on the right in text format. The program does not seem to make use of screenshots or other media.

If you look at the games listing you will notice that it largely consists of older games. The developers are releasing updates regularly which come in the form of monthly updates in separate programs. The Cheatbook database itself seems to be updated once a year only with all the new games. It would have been better if the program came with an auto-update option.

The program itself supports a wide variety of gaming systems. From PC games to all kinds of consoles, including the Super Nintendo, Sega Genesis, Dreamcast, Sony Playstation, Nintendo DS and this generation's console systems.

New cheat codes and game tips can be added manually to the database as well. That's handy for games that are not listed yet in the program, or for adding new cheats to a specific game.

The biggest issue by far is the lack of updates throughout the year. This is somewhat mitigated by the release of the smaller monthly updates. Surprisingly though, only the latest update is available for download at the developer website.

The game cheats database is also searchable directly on the developer site. This database contains all cheat codes, both those that are available in the applications and new ones that have not made their way yet into the programs.

Windows users can download CheatBook from the developer website. The 51 Megabyte download needs to be installed before it can be used. The program is compatible with 32-bit and 64-bit editions of the Microsoft Windows operating system.

Previous Post: « Patch My PC, Check For Windows Software Updates
Next Post: « How to Adjust On-Screen Windows Using the Number Pad with ReSizer