Nothing seems to annoy PC users more than networking problems.  They begin with the inevitable when Windows fails to install the drivers for either your network controller card, your WiFi or usually both when you come to install the operating system.  Rather than just being able to get straight on with installing your software and Windows Updates you spend the next hour faffing around trying to find the appropriate discs and get the right drivers installed just so you can get online.

Then there are the problems associated with getting, and staying, online.  Once you're there and connected there are inevitable breaks in your connection.  These are commonly unrelated to your own hardware and operating system but it doesn't make them any less irritating.

Finally you have have issues with accessing other computers, devices and network shares on your home or office network, and anybody who has tried to get Windows 7's HomeGroup feature to work reliably will know what I mean.  You might be pleased to hear then I'm running a completely free live webcast next Thursday November 3rd on the subject of Troubleshooting Network Issues in Windows 7.  It's almost too big a subject to squeeze into an hour, but I'll cover the most common problems and how to get and keep yourself online for both the Internet and your network.  You can pre-register for the webcast here.

The webcast will be followed by a Q&A and starts at 10 PT, San Francisco | 5pm - London* | 1pm - New York | Fri, Nov  4th at 5am - Sydney | Fri, Nov  4th at 3am - Tokyo | Fri, Nov  4th at 2am - Beijing | 11:30pm - Mumbai.  *IMPORTANT NOTE British Summer Time is ending this weekend and the clocks don't go back in the USA for another week.  I'm not sure when the clocks go back in other countries but the times listed here (except for the UK time which is now correct) are summer times.  Check back on the day but I'll make sure the website is updated in the next few days.

Anyway it really is a lot to squeeze into an hour so I wanted to share with you here some of my top networking tips, the first one of which you might find a bit odd.

This is by far one of my favourites as it involves PCs that just won't start.  If you find that your PC hangs at the loading Windows screen and simply refuses to go any further unplug your network cable.  This problem can occur if your BIOS is set to allow network booting.  Simply unplugging the network cable will immediately allow Windows to continue booting.

You'd be surprised how many networking problems can be fixed by simply switching off your router and turning it on again.  This is especially true if you encounter the all-too common problem when networking and Internet works fine for all computers connected via a physical network cable but WiFi goes down completely.

This is a very common one when a PC is moved from one place to another, such as when you move house.  You put the computer back together, plug your Wi-Fi USB dongle back in and suddenly discover that you can't get online.  This is caused by a driver problem and can be simply fixed by unplugging the USB dongle and plugging it into the socket it was plugged into before.

If your WiFi network is causing problems that include showing up as an unidentified network that you suddenly now can't connect to, your settings for that WiFi network have become corrupt.  Go into the Network and Sharing Centre (accessed from the network icon on the Windows 7 Taskbar, or through the Control Panel) and click on Manage Wireless Networks.  Find the network that's causing problems and delete it from your computer.  Now you can reconnect to it and build a new network profile that should work fine. 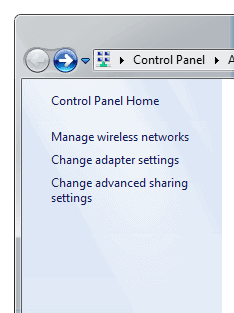 There are multiple channels that WiFi routers can be set to but some are set to either a specific channel or to fully automatic.  If you really arehaving trouble with your WiFi try loggin into your router's administration settings and changing the channel.  Problems can commonly be caused if you have a neighbour also using the same network channel as you are.

What are your top networking tips?