The software collection at Nirsoft is held in very high regard by the majority of Windows users. Nir Sofer's latest program is NetworkTrafficView, a network traffic monitoring software that captures network packages that display statistics and information about a computer's network traffic in its interface.

The network software works best with either the freely available WinPcap Capture Driver or Microsoft's Network Monitor Driver. Both driver downloads are linked on the official program page. Users need to have at least one of the drivers installed to make full use of the software.

NetworkTrafficView supports a Raw Sockets method as well which unfortunately is not as reliable as using one of the network monitor drivers.

Some Windows users need to run the network monitoring software with elevated rights. This was for instance the case on my 64-bit Windows 7 Professional PC system, as no network adapter is discovered by the program otherwise. 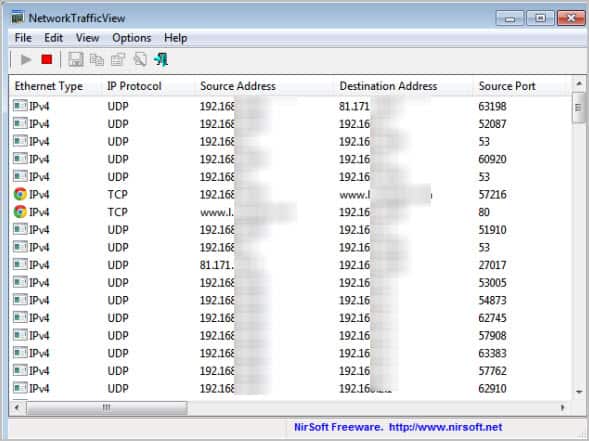 The program afterwards displays the network traffic in realtime in the application interface. This includes the IP protocol, source and destination address, ports as well as packet information, the process and the total data site transferred.

A click on the stop button pauses the capturing for the time being. A search is provided to find specific items in the listing.

The listings are fully sortable with a click on the column headers. It is for instance possible to sort by process, destination address or data size.

NetworkTrafficView comes with the usual assortment of features, including the ability to create a HTML report and to export the current selection as txt, xml or csv files.

I rarely think that Nirsoft software lacks a feature. This time though I'd like to see a filtering option to filter traffic directly while it is captured. This way you could monitor a specific process or only data packets above a certain size in the interface.

NetworkTrafficView is available for 32-bit and 64-bit editions of the Windows operating system. Windows users can download it and the necessary capture drivers from the Nirsoft website.