I have set my phone to be silent all the time, as I find it highly annoying when it goes off in public. I experienced some embarrassing situations in the past where it would do that in the supermarket or a crowded location. Others do not seem to think the same way, as I run into a lot of people on a daily basis who have set their - often silly - ringtones to a loudness that could entertain a stadium.

Many modern smartphones can turn any mp3 or music file supported by the phone into a ringtone. That's unlike it was years ago where you had to create ringtones before you could use them as the phone's ringtone.

Free Ringtone Maker is a free program for the Windows operating system that can turn any mp3 file on the computer into a ringtone.

There are still situations where you may want to customize a ringtone, for instance if you do not want the ringtone to start at the beginning of a song, but somewhere in the middle.

And that's exactly the situation where Free Ringtone Maker comes into play. You can load any mp3 from the computer into the application. 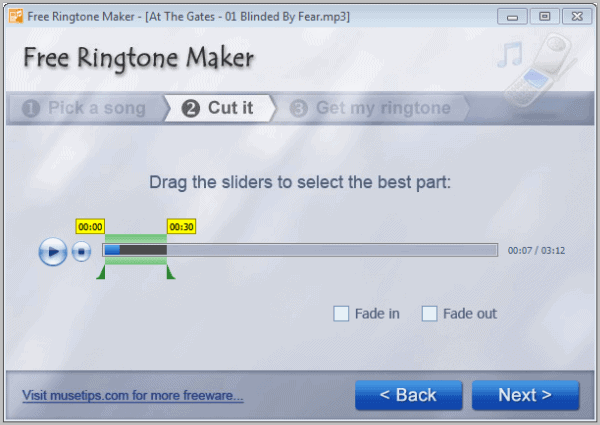 Once you have loaded the mp3 into the program you can cut it. This is done by moving the beginning and end sliders to the locations that you want the ringtone to begin and end. You can click the play button anytime in the menu to listen to the current selection.

The ringtone is not limited to 30 seconds, you can increase or decrease the playtime if you like, and configure fade in and fade out options separately.

Once you are done you hit the Next button to open a save file browser to save the ringtone to the computer.

The best feature in my opinion is the simplicity of the operation. While it is possible to use a heavyweight music editor like Audacity for the same job, it usually takes a longer time getting adjusted to. Free Ringtone Maker only supports the creation of ringtones and that without a steep learning curve.

You can download Free Ringtone Maker from the developer website. The program is compatible with 32-bit and 64-bit editions of the Microsoft Windows operating system.