Over the past 20 years or so, I played numerous computer games on many different platforms. This included all time classic games like the original Pirates game on the C-64, the first Civilization game by Sid Meier or Unreal Tournament. I have fond memories of those games, and sometimes feel the urge to re-play them. Unfortunately though this is not as easy as it sounds. It is becoming increasingly difficulty to find some of the older games, even PC games, on the Internet.

While it is certainly possible to download them from an Abandonware site, it is not always clear if the right holders have made the game available for free. It is a grey area legally and I prefer to buy old games instead.

One of the sites that I discovered some time ago that caters to the old games niche is Good Old Games, or GOG. All games on the old games websites are DRM-free and working on newer versions of Windows. 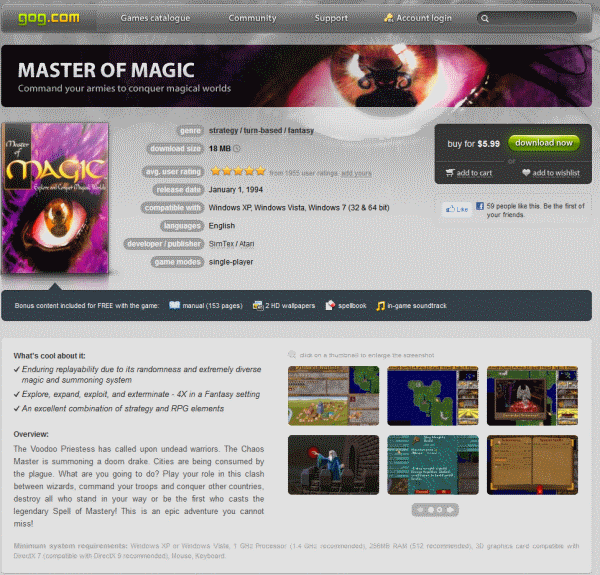 Even better, prices usually range between $5.99 to $9.99 which I personally find very acceptable for classic PC games. When you look at the games catalogue, you will find many classic PC games listed. From the Alone in the Dark and Baldur's Gate series over classic Sierra adventures like Gabriel Knight or Phantasmagoria to all time favorites like Dungeon Keeper, Panzer General 3D Assault and Unreal Tournament GOTY.

The majority of games retails for $5.99 or $9.99 with only a few exceptions that break the $10 mark which means that you can get between 5 to 10 different games for the price of one PC game that has just been released.

Here is a list of games that I can recommend on Good Old Games:

All 24 games and extensions would cost $171.78 Dollars. This may look like a lot of money, but it turns out that it boils down to $7.1 per game if you buy all the games listed above.

You find lots of good old games in the list, classic games that every PC gamer should have played. Yes, graphics are definitely not top notch anymore but if you can ignore that, you end up with lots of value for your money.

The game pages on the Good Old Games website list game compatibilities, with most PC games being compatible with Windows XP, Windows Vista and Windows 7. Users do need to know that some old games limit the screen resolution. It can happen that the maximum resolution of a game is 640x480. Some games can be played in window mode to make them more playable.

The community part of the website has forums for each game much like the Steam community forum. Here you find tips, tricks and help if you run into problems.

In short: Good Old Games offers affordable PC gaming classics that are compatible with recent operating systems. The only downside for non-English speaking users is that games are only offered in English on the website.