I love playing Tower Defense games, especially in Warcraft 3 The Frozen Throne, but also on Flash game sites on Internet websites. Castaway Island TD is a rather unique breed of Tower Defense games, as it combines an adventure like experience with tower defense gaming. The game is a spin-off of the highly popular Castaway franchise.

The game plays on beautifully drawn 2D maps. Both the interaction with NPCs and the tower defending part take place here. The adventure part, apart from the map layout, has been reduced to a minimum though. Footsteps indicate the path that the monsters take from their start to the Crystal that needs to be defended by the player.

Trees along the route act as placeholders for towers. To place a tower, the player needs to move to that tree until it is highlighted on the map. A tap on space opens the buy menu where one of the available towers can be selected. 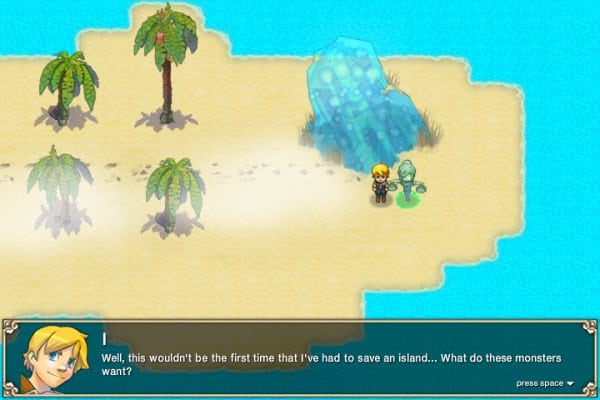 Towers include the usual assortment of Tower Defense classics, like the ground only attacking boulder tower or the versatile spear tower. Additional towers become available later in the game. But it is not only towers that the player can use to stop the creeps from reaching the crystal. Traps are a second option. Included here are an ice trap to freeze creeps in place for a short period of time, or the poison trap which poisons them for some time.

Towers can be upgraded for money. Upgrading towers increases the tower's range and damage output, among other things.

Creeps sometimes drop gems which are the last weapon in a player's arsenal. These gems can be attached to towers to give the towers special abilities. Some freeze enemy creeps, others add damage types like fire.

A pet needs to be selected after the first level. Three pets are available, from a pet that collects dropped money to one that grounds air creeps. 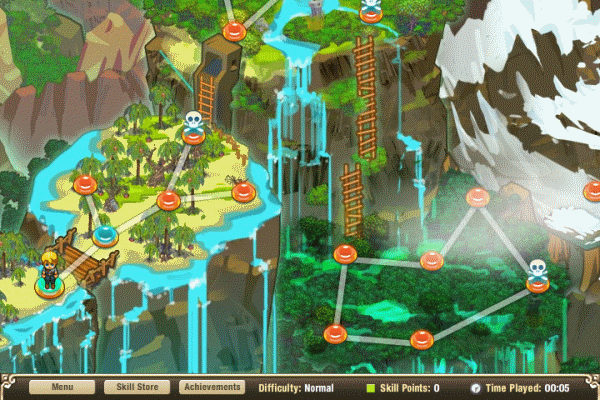 The world map indicates a player's progress in the game. It is always possible to go back to play a map again, especially if you want to achieve a perfect score in all levels. The boss levels are also highlighted on that map.

You may need to change your skill set for some levels. The first boss level on normal for instance may require that, especially if you picked skills that are not offering a bonus in that fight.

Maps, at least in the beginning, consist of 2 to 6 waves only, which is low in comparison to other tower defense games.

The game becomes a bit dull mid-game due to a lack of challenging levels and monster variation.

Castaway Island TD is nevertheless a well designed game, suitable for short breaks as levels do not take longer than a few minutes each.

Interested gamers can play the game over at the Flash gaming site Kongregate.