Mozilla has just officially released the first version of Firefox 8 Aurora. Firefox 8 will reach beta stage in about six weeks and a stable release in twelve weeks.

We already mentioned earlier this month that Firefox 8 will ship with a new add-on compatibility assistant that is giving users more add-on control the first time they update to a new version of the browser. The core change here is that users can enable or disable add-ons individually on first start.

This changes with the release of Firefox 8. The browser displays a screen that asks the user explicitly to allow or disallow the installation of third party add-ons before they are executed for the first time. It seems that this change is only affecting add-ons and not browser plugins. 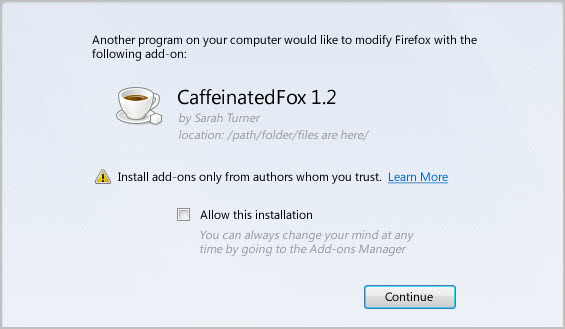 A new option was added to the general tab of the Firefox options which could speed up the start of the browser for users who restore their previous browsing session. Instead of loading all tabs on startup, it is now possible to load the tabs when they are selected by the user. This is the same functionality that the previously reviewed Bar Tab add-on for the browser. The setting has been available before in the Firefox about:config configuration as browser.sessionstore.max_concurrent_tabs.

A downloads history has been added to the History window of the browser. It is now possible to find all previous downloads listed there next to web pages, tags and bookmarks. Firefox has previously saved the download history, the new addition only makes it more accessible in the browser.

Sören Hentzschel lists several under the hood changes on his blog. Firefox 8 now supports multi-process hardware acceleration which is a per-requisite for the upcoming Electrolysis project, which will move core browser elements like the UI, plugins or web contents.

Developers can check out the relevant changes on the Firefox 8 for developers web page.

Previous Post: « Why Firefox is Not Scoring 100 In The Acid3 Test
Next Post: Google Date Keeper, Add Date Filter To Google Search »