Every open tab in the Firefox web browser uses computer memory; in fact, every tab open in any browser uses memory.

That's not a problem if a dozen or less are open, but can quickly become one if the count reaches 40, 100 or more. Some users are experiencing lags and delays because of this, which often can be resolved by restarting the browser.

It does not really make sense to keep all tabs in the RAM all the time. Think about it. The monitor resolution limits the number of tabs that are shown to the user at the same time in default view. And practically, there can only be one active tab per browser window unless you use a browser like Vivaldi which may display multiple sites in a single tab.

An extension to load tabs on demand is the next best thing to a browser that uses an algorithm to only keep the active tab and the most likely to be opened tabs in memory.

Update: BarTab has been discontinued. You may use an extension like Sleep Mode instead to unload tabs automatically. 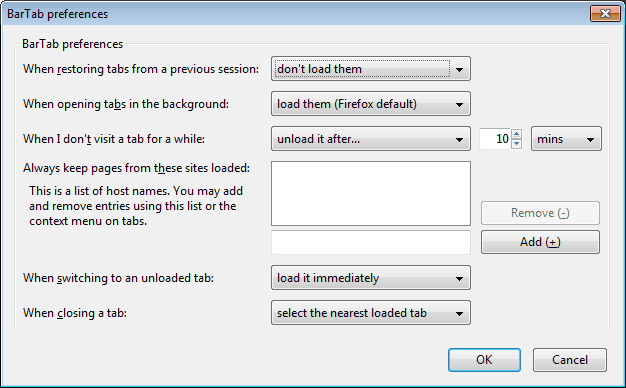 BarTab does that. The extension has been this popular, that Mozilla has included part of its code in the upcoming Firefox 4 browser.

The extension offers more features and improvements when compared to Mozilla's implementation which only uses the functionality for the browser's session restore feature.

This core functionality and a lot more can be configured in the add-on's preferences. But more about that later.

A click on an unloaded tab in the browser loads it immediately. This means it will take longer to access tabs that are not loaded. The time depends largely on the speed of the Internet connection. New tabs are automatically loaded which is the default functionality in the browser.

One interesting feature is the ability to unload tabs after a certain amount of inactivity. This is set to ten minutes by default, which means that active tabs that have not been visited in the last ten minutes will be unloaded automatically by the add-on.

Some users may have sites open that they want to access all the time. The preferences have an option to whitelist domains, so that they are not unloaded after inactivity, and always loaded if tabs are restored from a previous browsing session.

But how effective is the BarTab add-on? Can it be used to save RAM and cpu utilization while working with the Firefox browser?

BarTab can save computer memory, and speed up session restores in the browser. The effectiveness of the add-on increases with the number of tabs open at the same time. The more it can unload, the better the effect on the browser's memory usage. Firefox users with lots of open tabs, and users with computer's that have a low amount of RAM will benefit from this add-on the most.

BarTab is available for Firefox 3 and Firefox 4 at the official Mozilla Add-on Repository.

no rating based on 0 votes
Software Name
BarTab
Advertisement