Iran to create its own Internet... Part 1

The Internet is a fascinating place, especially when countries that don't embrace the concepts of freedom of expression and freedom of speech are involved. Each of these countries takes it's own view of what the Internet should be, and they usually follow political conventions in those countries. This could be set to change however.

Iran looks set to create its own Internet, just for the Iranian people. In a report by the Wall Street Journal the country sees the project as a way to end the fight for control of the Internet and, possibly, a way to defend the regime against the pro-democracy protests that have spread like wildfire across the middle-east this year.

On that score it would make sense in some ways as social networks including Facebook and especially Twitter were used to help mobilise pro-democracy activists and get people massing on the streets. This move would essentially cut the whole of Iran off from the wider Internet and indeed the wider-world.

Now I said that the way curtailing of Internet freedoms happens usually mirrors the political conventions of the country involved. This is probably going to be seen as an unexpected twist.

China, the world's largest communist state has broadly allowed access to the general Internet. It took some years to get this far and many websites are still curtailed or blocked completely. The Chinese government are part of the wider world community however and while questions still remain about the country's Human rights record, it does at least recognise that opening up to the wider world can only be a good thing.

It's China that has been apparently encouraging the secretive leader of North Korea, Kim Yong Il, to open up his own economy, an idea that has so far failed to gain acceptance. 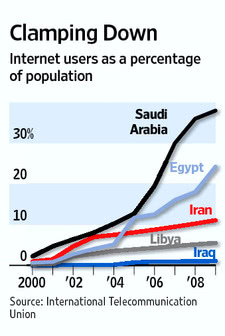 North Korea is far more closed and secretive than China, and is the most closed society on Earth. It's widely accepted that only supporters of the regime are permitted to live in the country's capital city, and footage has been seen of entire villages being forced to watch the public floggings and sometimes executions of those to question the regime.

North Korea has not embraced the Internet. Instead they have their own internal network, a country-wide intranet if you will. This system is available on the only computer operating system available in the country, a modified version of Linux. It is extremely limited and delivers only propaganda about the state. To this day, most people in North Korea live their lives completely oblivious to what's really happening in the world around them.

Iran however by contrast is a democracy. Its leaders are elected officials. There have been questions raised about just how democratic the country's political system truly is but you might expect them to adopt a stance more in keeping with China, not the secretive North Koreans.

The answer probably lies in the recent uprisings in the countries around them and the fact that only around 10% of the Iranian people currently have access to the Internet. This move is clearly all about control.

This does raise some interesting questions about what the Internet currently is and what is might be set to become. I'll talk more about this tomorrow in Part 2 when I'll look at the challenges faced by western countries.