Since being awarded my MVP from Microsoft on January 1st this year I've had a fair few questions from people asking about the MVP program, whatÂ  it is, what the benefits are and how you can become one.Â  I thought I'd write this up here for you all as a guide as we all know the best tech professionals read gHacks.

So what is an MVP?Â  The Most Valuable Professional award exists to recognise the contributions to made by tech professionals to the user communities for Microsoft's various products.Â  An MVP category exists for everything from Windows to the Xbox, Small Business Server, OneNote, Dynamics, ASP.NET and even the Mac.Â  The blurb on the official MVP website says...

We seek to recognize the best and brightest from technology communities around the world with the MicrosoftÂ® Most Valuable Professional (MVP) Award.

These exceptional community leaders come from a wide range of backgrounds. They are teachers, artists, doctors, engineers, as well as technologists, who actively share their high-quality, real-world technical expertise with the community and with Microsoft.

With the MVP Award, we thank these inspiring individuals for representing the voice of thousands in the community through the powerful and independent feedback they give us, and for helping our customers maximize the potential of their software.

The MVP award scheme operates worldwide in every country that Microsoft has a presence and is managed locally within individual countries.

So how is it that MVPs "enrich technical communities" as the website so proudly says?Â  This can be through something as simple as contributing to newsgroups or forums to appearing at conferences, writingÂ  books and wikis, speaking at user groups or articles on your own (or another) website or blog and even making podcasts.

In short there are a great many ways to help other people online or in person and they can all be recognised.Â  You might, for instance, help a local community centre with support.Â  Why shouldn't this qualify you to become and MVP?Â  Simply put, it's exactly the sort of activity that will help.

In short you do not need to be an editor for gHacks to succeed, your general reach is much less important than anything you're actually doing to help people and enrich their experiences with Microsoft products.

So how do you become an MVP and what are the benefits?Â  There are several ways to become and MVP.Â  You can be nominated by another MVP or by a member of Microsoft staff (which is how I was nominated).Â  You can even nominate yourself or a friend or colleague.Â  It's all done on the main MVP website.

There are about 5,000 MVPs worldwide spread across around 100 product categories.Â  Not everybody is lucky enough to be awarded an MVP first time, but it's worth resubmitting an application the following year if you feel you've done more to qualify for the award.

For those people awarded an MVP the exact category you'll be awarded might not always be the one you expect, but will be tailored to the specific help and support you've been offering people. 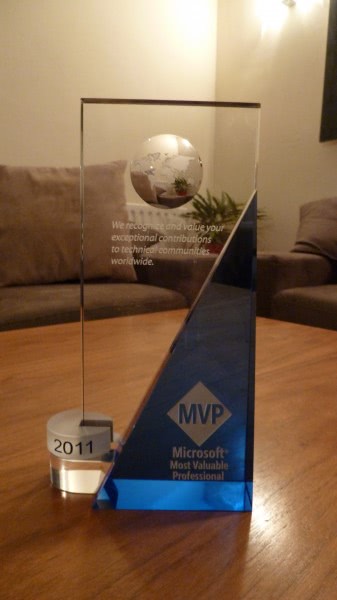 There are a wide range of benefits to being an MVP including a very lovely glass trophy (seen here).Â  The main benefits though come in the form of access to Microsoft staff and the raised profile that comes with the award.

There's all manner of access to people within Microsoft that is available to MVPs, Microsoft have demonstrated that they have trust in you and, as such, are much more likely to want to listen to what you have to say.

Â The MVP community itself also offers many benefits, in fact I was very surprised how many. It's an exclusive and really rather well hidden club that you'll be welcomed into.

The main MVP website also contains a directory of MVPs should you want to contact an expert in a particular field for any reason, this is a useful addition as those people looking for people to give talks and seminars will know where to go.

One of the most important things to note is that Microsoft actually do embrace the independence of MVPs. They talk on their website about MVPs having "separate opinions and perspectives, and are able to represent the views of the community members with whom they engage every day." This is actually true and becoming an MVP doesn't put you in the company's back pocket.

In all there are a great many benefits to becoming an MVP not the least of which is the satisfaction of having helped people in user communities, in a role no matter how large or small.