It was only a matter of time until someone came up with a concept to hide the existence of a True Crypt volume on the computer. A method has been described in detail in February, months before the release of the TCHunt application.

TCSteg basically hides the True Crypt container inside a MP4 video file. Even better, that mp4 video is still playable which makes it more plausible that the file is indeed just a video and not host for an encrypted True Crypt volume. 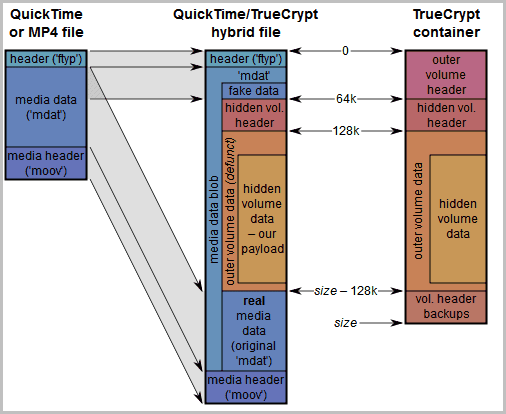 There are still some limitations though, for instance a limitation to a maximum file size of 4 Gigabytes, or the fact that someone who would monitor the bitrate of the video could identify the manipulation. The method however makes it a less likely that someone will find the hidden True Crypt container on the system, as it renders software such as TCHunt useless.

A Python script has been created that handles all the file merging, you can download it from the developer website. You also need a solid quality mp4 video file that's encoded efficiently to make the combined file size more plausible.

You run the Python script with the following command

where RealVideo.mp4 is the mp4 video that you want to use for the disguise, and TrueCryptcontainer.mp4 the encrypted True Crypt container.

Windows users need to first install Python before they can run the Python script.

The process combines the two files, and the end result should be that you can still play the resulting file in a video player and that you can mount the hidden True Crypt volume inside that video.

Additional instructions and the Python script are available at the developer's website.