NVIDIA has just published a new beta driver on their driver downloads website. The driver GEFORCE/ION DRIVER V270.51 is available for all supported operating systems and NVIDIA graphics card from GeForce 6 to the latest 500-series and ION desktop GPUs.

The NVIDIA driver comes with two new features that deserve a closer inspection. NVIDIA Update introduces automatic update checking and downloading, which is a long requested feature by users and software developers.

The new component will be installed as a system service on Windows. It launches the daemonu.exe process and will make a single check per day for new stable drivers and display notifications to the user if a driver update has been released. The process itself will run in the background all the time.

Users can change the frequency of update checks and other settings in the NVIDIA Update options, accessible via the System Tray icon.

Here it is possible to manually check for updates and to change the preferences of the updating module.

The preferences tab offers options to disable automatic update checks, change the frequency of updates from the default once per day setting to once an hour, week, month or during login, and to include beta updates in the checks.

The second addition is the inclusion of the 3D Vision Controller driver which adds support for NVIDIA's 3D Vision technology that requires a compatible graphics processing unit, specialized 3D glasses and displays or projectors.

Regardless of that; Most users won't have the hardware to make use of the feature. This means that you either need to disable the driver during setup (by selecting custom setup) or to stop the NVIDIA Stereoscopic 3D Driver Service from running if you have selected automatic installation.

The NVIDIA 3D Vision process nvSCPAPISvr.exe is running automatically on the system if you have installed the driver, no matter if your hardware is 3D compatible or not. 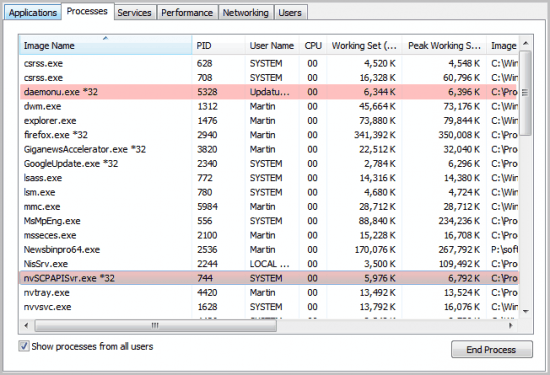 You can launch the Services configuration manager with Windows-r, services.msc and the enter key.

Sort the services by name if that is not already the case and locate NVIDIA Stereoscopic 3D Driver Service and NVIDIA Update Service Daemon in the listing.

Double-click each entry, click the Stop button and switch the startup type from Automatic to Disabled.

The processes will be terminated once you click on the Stop button. Disabling the services makes sure that they are not started on system start.