Process Explorer by Sysinternals is one of those programs that every computer technician and enthusiast should have in their troubleshooting collection. Process Explorer 14 has just been released by its developer Mark Russinovich. The new version of the popular process analysis tool is considered a major update.

Process Explorer shows you information about "which handles and DLLs processes have opened or loaded". If you ever wanted to know what's launching all those svchost processes, or why a process has been launched then Process Explorer is the tool to reveal those information.

It displays all processes that are currently running on a Windows system with hierarchical information, the cpu and memory utilization, and the company that has created the program. From here it is super easy to sort all processes by how taxing they are on a system. 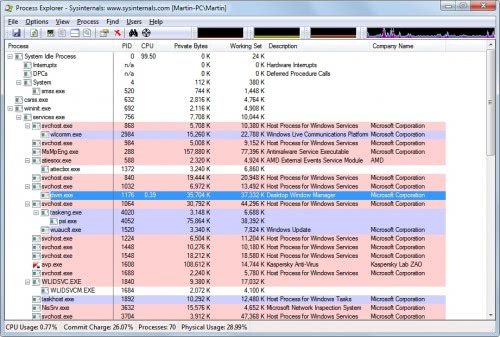 But what's new in Process Explorer 14? Take a look at this brief paragraph:

This major update to Process Explorer adds a slew of enhancements and new functionality including network and disk monitoring, an improved multi-tab system information dialog, additional memory statistics, a new column that shows aggregate CPU usage for a tree of processes, improved DLL scanning performance and accuracy, command-lines in process tree tooltips, support for more than 64 CPU systems, and more.

A few interesting additions. The tree cpu usage column for instance can be helpful to determine the cpu usage of a program spawning multiple processes, like Google Chrome for instance (last column in the screenshot).