Restore Music And Videos From Apple Devices To iTunes

A hard drive crash can put a big dent into a computer user's music and video collection, if there are no backups. Sometimes though there are other possibilities on how to recover a music and video collection after a crash. One of those options is if part or all of the collection has been transferred to a mp3 player, smartphone or other device capable of playing music or video contents. A valid option in this case is to transfer the contents back to the computer system once the hardware problems have been sorted out.

GizmoRip is a program specifically designed for Apple devices such as iPods, iPads or iPhones, offering options to transfer music and video back to iTunes or another location on the hard drive. The freeware will identify connected all supported Apple devices automatically, and display their contents in the program interface. It generates a general file listing of all multimedia contents and displays playlists stored on the device as well. 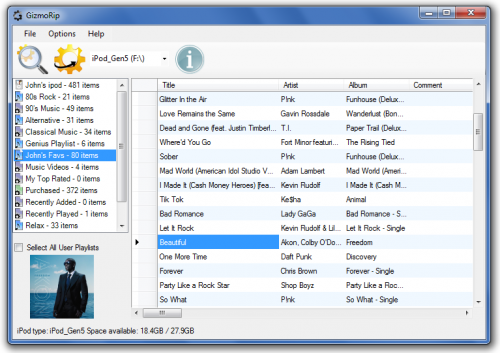 The software will recognize multiple devices, offering to switch between them easily from a pulldown menu in the main interface. It will also display the type of Apple device, and the free and used space on it. A click on the Recover Music button, or a selection of the same option under the File menu initiates the transfer of the playlists and multimedia files selected back to iTunes. This works on any computer system running iTunes, even if iTunes was just installed on it.

It is possible to restore just one playlist for instance, or everything that is on the iPod or iPhone. GizmoRip ignores existing files automatically, with an option to change that behavior in the program settings. 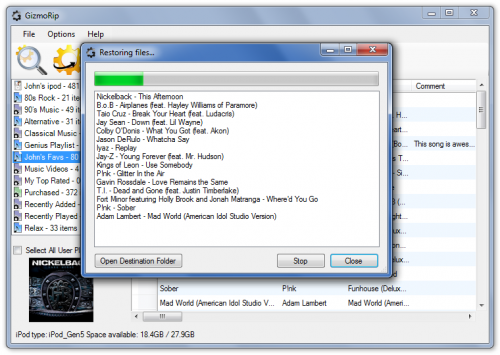 Here it is also possible to disable the import of the music and video contents to iTunes, and to specify an alternative export directory, in case iTunes is not installed on the target computer system.

GizmoRip is a nice to have software program for Windows. It can be useful in multiple ways, including restoring music after a hard drive crash, but also transferring music and videos to a computer that does not have iTunes installed. The program is compatible with all versions of the Windows operating system from Windows 2000 to Windows 7.