How To Backup And Restore The MBR In Windows - gHacks Tech News
ghacks.net

How To Backup And Restore The MBR In Windows

A question came up recently in the comments on how to backup the master boot record MBR (see How To Detect A 64-bit Alureon Rootkit Infection for that). This article is going to review a handful of free applications for Windows that can be used to backup and restore the MBR, with no deeper technical knowledge required.

The master boot record is located in the first sector of a hard drive, and while it has different functions it is commonly known for finding bootable partitions in the partition tables and loading the boot sector which often is a boot loader.

A backup of the master boot record is often the best and most convenient way to repair the information so that the system can boot normally.

The first command lists all partitions of drive 0, the second backs up the master boot record of the first drive of the system in the file Backup_MBR_0.bin, the last restores the previously created MBR backup to the drive.

Another command line tool for Windows which comes with a basic menu which makes the program usage a bit easier. MBRTool can be used to backup all MBRs automatically, or work with specific master boot records. The user interface makes it easier to work with, even though it does not make a big difference compared to MBRFix.

The only program with a graphical user interface. HDHacker can backup and restore any sector of a partition, but has a specific option to backup and restore the MBR sector. It is probably the easiest to use of all the three programs of this guide.

That leaves a question: How often should you backup the MBR? A backup is only necessary if something in the setup of the PC changes, for instance if another operating system is installed or removed, or if the hard drive partitions are changed. 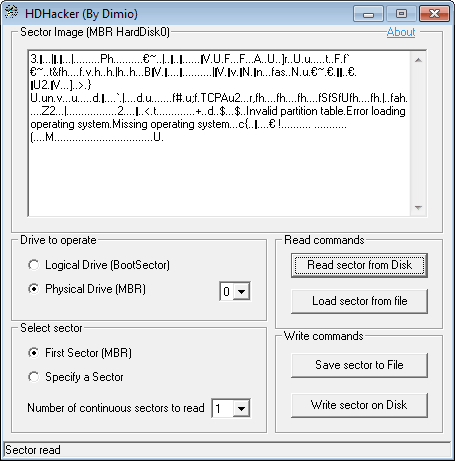 Article Name
How To Backup And Restore The MBR In Windows
Description
The guide reviews two free programs for Windows that allow you to backup and restore the Master Boot Record (MBR).
Author
Martin Brinkmann
Advertisement

Previous Post: « Compress Folders, Files In Windows To Save Storage Space
Next Post: How To Move The Steam Folder To Another Drive »