Chinese company Novo first announced their Coloured Glaze Media Centre PC at CES at the beginning of the year but now it's approaching release, EngadgetÂ China have had a close look at it.Â  But is a small PC with a transparent plastic block on the front gorgeous or a gimmick, and more importantly, where you are supposed to put your DVDs?

Externally there's the now customary HDMI port and support for wireless 802.11n networking.Â  But what is it that will give this media centre it's unique selling point? 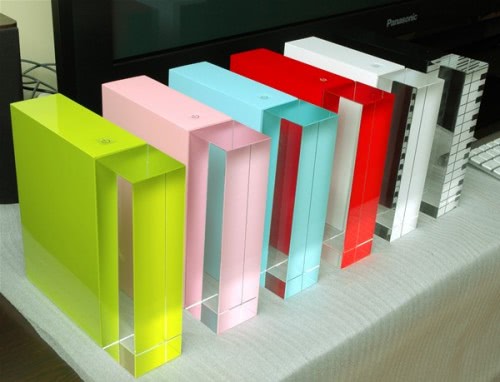 Â I have a small media centre under my TV through which I experience all of my television, video and music.Â  It's a small Acer that's pre-netbooks and, thus considerably more powerful than this HTPC and probably just as quiet (at least from across the room).Â  It's about the same size too and most importantly wasn't too expensive.Â  So what's my point?Â  While I can easily see the market for large screen all-in-one HTPCs, this I feel will be a bit of a gimmick and owned only by a few people who feel it will be cool to have a lime green computer in their life, Bridget Jones springs immediately to mind.Â  :)

It's a truly lovely piece of design though, nice and simple all round and easy on the eye.Â  In fact it's not what I'd expect a PC to look like at all so on that score it's going to win.Â  Should it make to Europe and the Americas though it'll all come down to price on whether this one's a winner.