Panda Cloud Antivirus made quite an impact in 2009 when it was officially released after an initial beta testing period. The cloud driven antivirus solution combined effective virus protection with a smaller local footprint and lesser updating hassles thanks to its cloud based design.

But resource efficiency is only one benefit of cloud based antivirus solutions. Panda Cloud Antivirus uses a technology that Panda calls Collective Intelligence which collects and processes malware samples in the cloud to generate updates and signatures against threats. 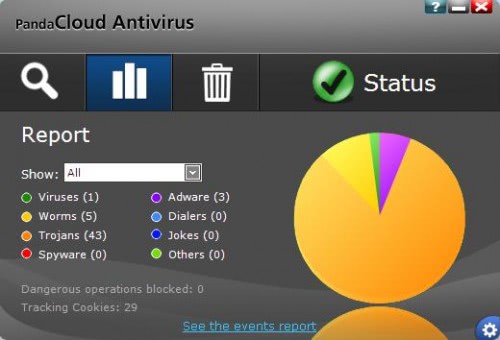 Today Panda announced the availability of Panda Cloud Antivirus Pro which will be offered next to the free edition. Both the free and pro version have been updated with new features:

* Automatic, transparent upgrades provide completely â€œhands-freeâ€ protection by eliminating the need for reinstalling the antivirus each time a new version is released.
* Automatic vaccination of USB and hard drives ensures neither drive type can transmit an infection while users are offline.
* Dynamic behavioral analysis provides an added layer of protection by analyzing running processes and blocking any found to be malicious.
* 24/7 multilingual technical support online.

Panda Cloud Antivirus Free users get the new behavioral blocking feature which is a "proactive, signature-less, protection against malicious actions typically used by malware which for instance includes generic blocking of malicious pdf, doc, xls and ppt droppers. Additional configuration options have been added to the free version as well to tweak settings and features such as advanced logging, recycle bin settings and exclusions.

It is now also possible to run Cloud Antivirus next to other antivirus solutions which is great for testing and for increased security. The small additional footprint of the cloud based solution makes this option feasible.

The pro version gets on top of that USB vaccination and behavioral analysis of running processes. Both the pro and free edition of Panda Cloud Antivirus are available at the official homepage of the security software. The software is now available in 20 different languages (plus nine in this release) and compatible with both 32-bit and 64-bit editions of the Windows operating system.