Why does it take so long to charge an iPad, iPhone or iPod on a PC? If you have been asking that question to yourself you might need to know that they do not play that well with low powered USB ports. There even have been reports that iPads could not be charged at all on some computer systems.

The motherboard manufacturers Gigabyte, Asus and MSI have developed a software update for Windows that will enable quick charging the Apple devices. The software update improves the charging speed by up to 50% and can even charge the device in multiple power stages.

If you check out the table on the image below, you will notice that the manufacturers, Gigabyte in this case, claim not only that it is charging devices faster, but also that charging is working on all different PC power states including shutdown and suspend modes. 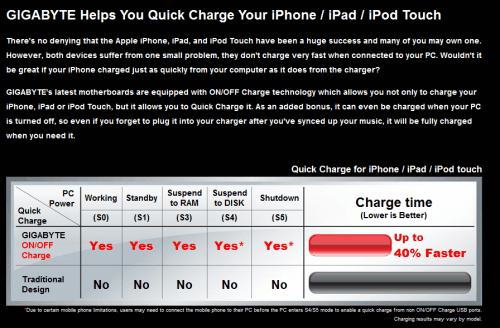 There is no denying that the Apple iPhone, iPad or iPod Touch have been a huge success and many of you may own one. However, both devices suffer from one small problem, they don't charge very fast when connected to your Pc. Wouldn't it be great if your iPhone charged just as quickly from your computer as it does from the charger?

Gigabyte's latest motherboards are equipped with On/Off Charge technology which allows you not only to charge your iPhone, iPad or iPod Touch, but it allows you to Quick Charge it. As an added bonus, it can be be charged when your Pc is turned off, so even if you forget to plug it into your charger after you've synced up your music, it will be fully charged when you need it.

Apple devices users who use Windows computer systems might want to head over to Gigabyte, Asus or MSI to download the new drivers that improves the charging time of their devices.

Gigabyte is the only company that is restricting the software to specific motherboards. Reports at Engadget suggest that it is possible to install the drivers on unsupported hardware as well as they are showing a video of a user who is using the Asus software on Sony laptops.