Save disk space with UPX

Disk space is cheap, but there are still situations where you'd like to reclaim space. For me, one of them is getting the maximum of the free Dropbox account I use to synchronize my applications between work and home. Hey, don't say my sysadmin I do this, he'd get a heart attack from the sole thought of a virus among my tools collection.

Of course {zip/rar}ing everything is a no-go; nobody wants to have to open an archive before being able to launch an application. So what?

Enter UPX, the reference packer for executable files. UPX compresses executable files (mostly .exe and .dll under Windows), but contrarily to zip/rar/whatever, it keeps them executable, also preserving  their properties (icon, version...). All this at the cost of a completely unnoticeable performance hit when starting the application. Sounds good? Let's compress everything executable in this Dropbox that is dangerously close to reaching its 2GB limit. 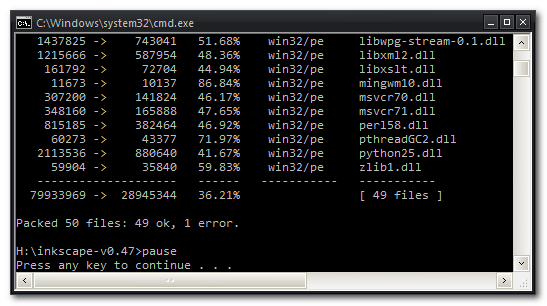 Of course you now want to do this on ALL the executables in a folder. But you're lazy, and the perspective of running this line inside hundreds of subfolders leaves you bleak. Lucky you, I'm lazy too, so I dug Stack Overflow to assemble a script that will do the operation recursively.

Ronan is a geek and musician living in Montreal. He likes scaring wary sysadmins with 2GB folders full of false positives and writes about software, music and life at flying molehill.

Article Name
Save disk space with UPX
Description
The guide walks you through the steps of compressing executable and dll files on Windows to save disk space without losing functionality.
Author
Ronan Jouchet
Publisher
Ghacks Technology News
Logo

Previous Post: « How Do I Find My IP Address
Next Post: A Life Without Flash 4 Weeks Later »