In March, Martin discussed QR codes, a form of 2D barcode that phone cameras can rapidly decode, with appropiate software (which can be found easily on Google). The practical uses are for phone numbers to be quickly entered or websites to be quickly launched; QR codes can feature in magazines, websites or on packaging, for example, to take users to related mobile websites.

QR codes can also feature in much less conventional mediums, a few of which I will highlight.

In Japan, most phones come with integrated QR code readers and, as such, QR codes are slightly more prominent than they are in the EU and US. When you read Wikipedia's article on QR codes, one of the first things you see is a picture of a billboard that features a QR code. Whilst this is definitely an interesting concept, I don't know if I'd feel comfortable pointing my phone at random objects in the middle of a large city at night! 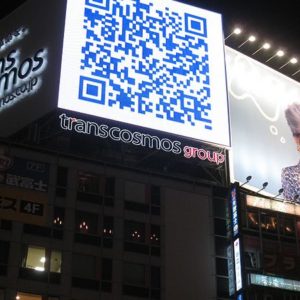 Another interesting example is a QR code t-shirt. Dozens of these are available; in fact, there's an online shop who primarily sell such shirts. My favourite is the shirt to the right, which has a QR code which decodes to 'Don't miss me'!

The Pet Shop Boys used QR codes on one of their single's, Integral artwork. Cooler yet, the song's video too featured QR codes which could be scanned and led to their website and a campaign against identity cards in Britain.

I'm a big fan of 'design' QR too. This is where the barcode is made to appear to contain a picture. For example, the below barcode leads to a page on the BBC's website:

This QR code leads to a company who specialise in the creation of design QR codes:

That same company worked on these QR code chocolates!

Have you seen any cool applications of QR codes?