Microsoft's plans to use the Word HTML rendering engine to display HTML emails in the upcoming email software program Microsoft Outlook 2010 has created quite a few protest websites that try to convince Microsoft to change their plans. Outlook 2010 is still in the beta stage and Microsoft is encouraging users to submit feedback to improve the email client before the release candidate and final release are released. 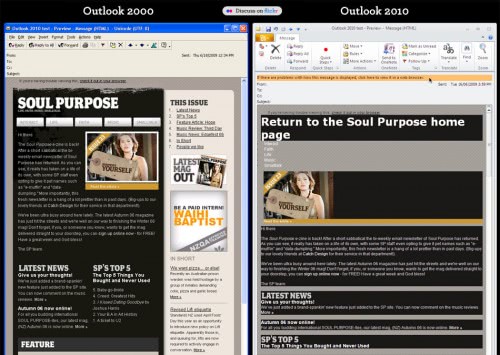 Microsoft Outlook 2000 was using the Internet Explorer rendering engine to display HTML emails. Microsoft mentions benefits that Outlook users gain by using Microsoft Word as their email authoring tool which include automatic styles and templates and SmartArt among other benefits. It would also not be in the best interest performance wise to use a different rendering engine for the display of HTML emails. (via Email Standards)

The initiators of the Fix Outlook protest website are making use of Twitter to rally protesters from all over the world. Every Twitter user that mentions fixoutlook.org in their tweets will automatically partake in the protest. The avatar icons of users will be displayed on the Fix Outlook website. Currently more than 15500 users have already joined the protest.

ChatGPT is used by cybercriminals to write better phishing emails

How to Update Microsoft Outlook?

Thunderbird 102.6.1 is a security update