The five default tabs that are available in the Windows Task Manager are offered by DTaskManager plus the two additional Ports and Kernel Modules section. The program displays extensive information in each section of its interface, something that can only be partially achieved in the Windows Task Manager. The processes tab lists for example the path of the process and the cpu time by default. 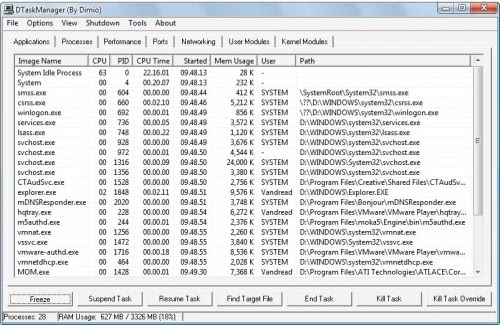 The Ports section displays all network connections of the local computer system offering massive amounts of information that include the process name, local IP and port, remote IP and port, the protocol, path and socket status.

DTaskManager offers some advanced functions on how to deal with processes. It can for example kill processes the usual way, force the process to be closed and initiate an override to close the process which will bypass permissions as well. Another interesting feature is the ability to suspend tasks. This is a feature known from the Linux operating system which can temporarily halt tasks. That's a handy feature in situations where all system resources are needed by a process as the user can suspend processes and resume them once the resources are not needed anymore for the priority process.

A few minor options are the ability to display the cpu and memory usage in the system tray. This can be displayed as a bar or as numerical values. DTaskManager is a solid and lightweight Windows Task Manager replacement. It is compatible with Windows 2000, Windows XP and Windows Vista.