When you want to run a program on a Windows PC, you have quite a few options to do so. You can click on the program icon on the desktop, taskbar or start menu if it is listed in those locations, browse the system using Explorer, use the built-in search or a third-party alternative, or use the run box to do so.

If you use the latter, you tap on Windows-r to display it on the screen, type the program alias, e.g. notepad, and hit the enter key afterwards.

The main issue here is that aliases need to be configured first before they become available. While Windows ships with a selection, regedit or cmd for example, the selection is rather limited and not extended to third-party software programs usually.

What's even more problematic is that there is no obvious way to add new aliases to the operating system. 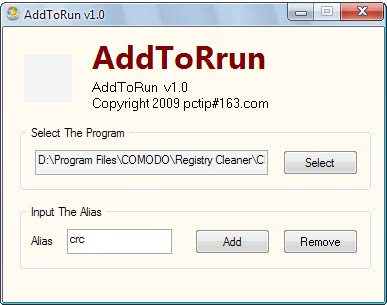 That changed with the release of the AddToRun program which provides you with an easy to use interface to add aliases for any program you desire so that you may load the programs using these aliases from the Windows run box.

There is not really much to explain about the interface itself. It consists of two elements. The first is used to browse the local computer system to select a file that you want to create an alias for. The second to set an alias for that file that will then be made available when you use the operating system's run box.

One nice effect of the process is that the program does not need to be running after the alias has been created. Removing an alias on the other hand is not as straightforward as the program does not keep track of the added aliases. This means the only way to remove one is to pick the file again and select the remove button instead of the add button.

The new alias is immediately active and will from then on launch the selected file in the run dialog window when it is entered.

AddToRun is a portable software application that will aid Windows users significantly, especially if they use the run box regularly to load programs.

Users who do not prefer to use this program to add executable file aliases can add the program path of the application to the system path of the operating system as well. If you do so, you can run those programs as well, but need to type the program name as aliases are not configured this way.

Assigning new aliases or shortcuts can really speed up the workflow on the computer system, especially if specific applications are started regularly in the run dialog box.

AddToRun worked really well during tests and the only thing to criticize is that the removal is not comfortable. The program has not been updated for years but it still works well in recent versions of Windows.

Martin Brinkmann is a journalist from Germany who founded Ghacks Technology News Back in 2005. He is passionate about all things tech and knows the Internet and computers like the back of his hand. You can follow Martin on Facebook or Twitter
View all posts by Martin Brinkmann →
Previous Post: « Bluetooth Devices Scanner
Next Post: Video Collection Software Movienizer »