Easy Peasy, which was formerly known as Ubuntu Eee, is a optimized (unofficial) version of Ubuntu for Asus Eee PCs and other netbooks. Netbooks have become very popular in the last two years which can be mainly attributed to the attractive price range and mobility.

The drawbacks of netbooks are their screen resolutions and hardware that was used to build them. Easy Peasy has been optimized for those limitations to provide the user with a better working experience.

The Linux distribution can be downloaded directly from the Easy Peasy website or by using the Bittorrent protocol. It comes with optimized software, settings and drivers.

Easy Peasy makes use of a net interface called Netbook Remix Interface that has been specifically designed for screen resolutions of netbooks. 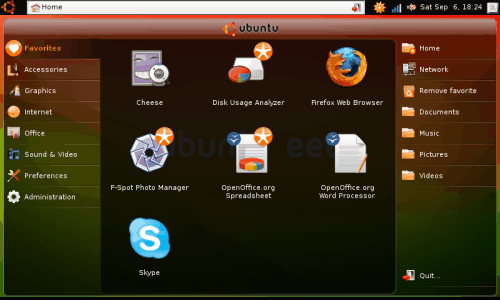 It does provide the means to change to regular desktop mode if that mode is preferred by the user. Easy Peasy does come with several non Open-Source software programs preinstalled such as Skype which might be controversial in the eyes of the Linux community.

While it has been designed with the EEE PCs in mind it should run fine on many other netbooks such as Acer's Aspire One.

Update: The operating system has been improved quite a bit in recent years. The open source OS has been optimized by its developers for low power consumption. The developers have added features to the operating system, including an instant online and social desktop that is using cloud computing services.

The always visible top bar acts as a taskbar of sorts, listing all open files and windows here. Here you also find the current time and connectivity information.