The signup process requires no email verification, there is actually no option to enter an email during signup which raises the question about data safety when the password or username is forgotten. Cloudo should work in most modern web browsers. A test in Firefox revealed an initial display problem which was solved by right-clicking and selecting a different skin from the list of available ones. The web operating system did not recognize Internet Explorer 8 yet.

Cloudo can be accessed from desktop computers or mobile devices but is far from feature complete. The public beta release is actually the same release that developers were able to access for about a year. 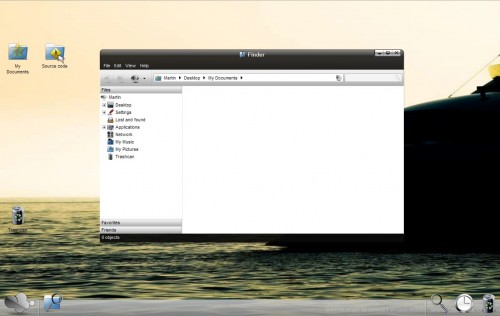 Some features that are already implemented are the file uploader, viewer, text editor and calendar plus a free goodies such as games, widgets and mashups. Loading times are acceptable most of the time although it usually involves waiting a few seconds before an application shows up.

Cloudo has been designed to be a open plattform meaning that it is possible for web developers to develop and share applications they create in the system. The development environment seems to be already accessible.

The public beta signup is time limited. If you are interested in Cloudo you should make sure to signup immediately even if you do not plan on using the service in the near future.