If you need the full processing power of your computer for an application or are installing an application that requires you to close all other open programs and processes then you might like Smart Close. The software program is your one click application closer that comes in handy in the described cases. Even better is the fact that Smart Close is able to save a system snapshot which can be loaded at a later stage again.

So how does it work? Let us take the usual software application installation. Many installers will ask the user to close all other running programs to avoid conflicts during installation. Smart Close is started when that screen comes up and the option to create a system snapshot and kill all running programs is available for selection in the interface.

Smart Close kills the programs so that you can commence with the installation using the suggested course of action in regards to other applications running on the system. After the installation has finished Smart Close can be started a second time to load the previous state of the system. It will launch the applications that were running at that time again. Most programs that are closed by the software program will be properly closed meaning that they can save system settings and return resources to the computer system. 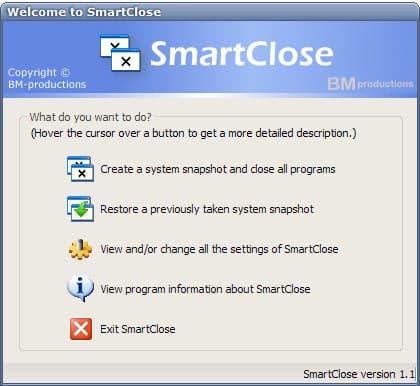 Smart Close will display the programs and services that it is about to kill. It will also display a window with protected applications that are needed to run the system (explorer.exe..) One interesting aspect is the ability to shutdown services as well. Please note that Smart Close will merely launch the applications when it restores a previous system snapshot. This basically means that it may not open the application in the state that you left it in. Word for instance will be opened with a blank document instead of the document you have been working on. The same is true for a number of other programs unless they come with a session restore feature.

Smart Close is compatible with all Microsoft operating systems.