What are the main requirements of a burning software? It should obviously support all operations that a user would need. It should also be fast, resource friendly. Free would be nice as well. Lots of different CD burning software programs are available these days on the Internet, from CD Burner XP over Deepburner to IMGBurn. Most of them handle the basic burning operations just fine but many are unfortunately making them more complex than they should be. Others use to many resources, have an irritating user interface or crash to often to make them the burning software of choice.

Ashampoo Burning Studio Free is an old version of the burning software of Ashampoo which has been released to the public. Everyone can download and use it without having to register or pay money for it. It starts up reasonably fast without splash screens and long loading times. All operations are selectable from the main menu. Some operations are further divided, the Burn Files and Folders category contains options to burn a new disk or update an existing one.

Burning Studio Free supports CD, DVD and Blu-Ray disks. Here is what you can do with the burning software: 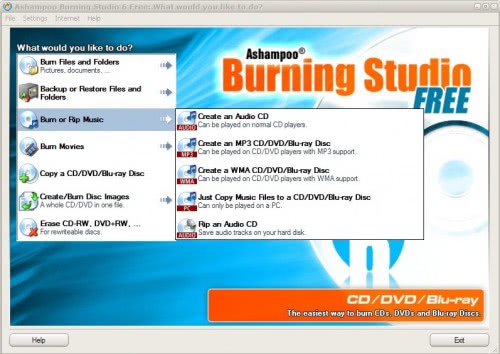 The list is pretty comprehensive. The most popular image formats (img, iso, cue/bin) are supported by Burning Studio Free which should be sufficient for most users.

Most impressive is the responsive interface which is much faster than that of Nero and similar applications.

I switched immediately from IMGBurn to it. IMGBurn was unfortunately rather complex to use. One example. To burn mp3 to disk one had to create a cue file before that was possible. Ashampoo simply takes the mp3 and burns them right away.