Keeping up with web proxy servers on the Internet can be a time consuming task. Proxies come and go that quickly that one could say it is nearly impossible to keep up unless someone would use scripts to check the web proxies automatically. The web proxy server list posted on Ghacks dates back two years and the main reason it was not updated is the fact that updating the servers would have to be done dynamically to provide visitors with a working list of proxy servers.

That is probably the same line of thought that the developer of Prime Proxies had when he created his website. The website publishes an up to date list of working web proxy servers which are checked regularly so that the chance of encountering a non working proxy server is slim.

Proxies are divided into three categories that are named after the proxy script that is being used on the proxy websites. The three main scripts are PHP Proxy, CGI Proxy and Glyph. Some proxy scripts work better on specific websites than others and it comes down to finding the web proxy server script that displays the favorite websites properly. 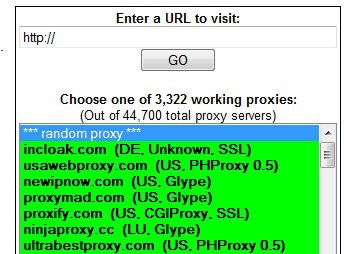 The Prime Proxies database contains a list of more than 2300 working and 5000 dead proxy servers. That should be enough for everyone to find a web proxy server that is working and not banned at the location that you are accessing the Internet.

Update: Prime Proxies is no longer available. I suggest you visit a site like Proxy.org for a large selection of web proxy servers that you can make use of. The site at the time of writing displays more than 3300 working proxies that you can use. Each proxy is displayed with its web address, country it is hosted in as well as proxy script used and whether it is supporting SSL.