Setting up your own music server is an interesting way of connecting your music library to the Internet. A fast enough connection at home and Java are the only two requirements for setting up the music server which can then stream music to the same computer, a network or the Internet.

Sockso is a multi-platform music server that can be run under Windows, Linux and Macintosh. Setup differs depending on the operating system. Windows users simply download the Sockso distribution from the website and unpack it to a directory on their hard drive. They then execute the windows.bat file which will load the Sockso server interface. Since it requires Java, you need to make sure that you have the latest Java version installed on the system before you execute the batch file.

The server interface is where the administrator adds music from the computer to the music server. All that is needed is to click on the Connection button and add folders to the server. The Collection Manager is also the place to create playlists that are then accessible in the web interface. 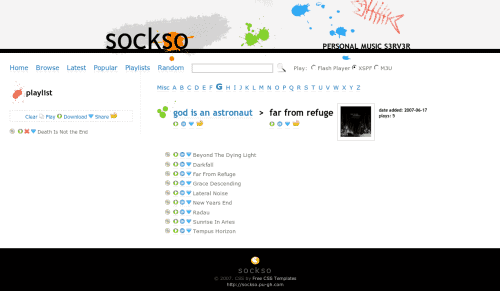 Checking if the music server is working on the Internet demands knowledge of the current IP of the computer. If you do not know about it you can Check the IP here at Ghacks. Then load http://your IP:4444/ in a browser which should also display the web interface of the music server.

If that is working you can begin to send that link to your friends so that they can tune in and listen to your music. It is also possible to simply use this as a way to listen to your own music collection while on the road.

Sockso does work fine as a music server and it is usually only a matter of minutes before it is up and running. It does have some serious limitations though. There is no user administration which means that anyone can connect to the music server not just the invited friends. Users who receive a dynamic IP from their Internet Provider will either have to check their IPs regularly or use a service that gives them a static IP.

It's probably the safest to run Sockso only on a local network. It can be configured to allow music uploads as well and it could become a popular application in University dorms or company networks.