Flickr is already offering an official tool to upload images their servers provided that you have a free or paid account at the site.. The software is supporting several operating systems and another tool made by a third party has to add features that the official uploader is not supporting to have any chance of being recognized at all.

It will however be interesting if Flickr adds support for XMP in the future. Other than that the Vista Flickr Uploader is supporting the usual features that image uploaders offer these days. 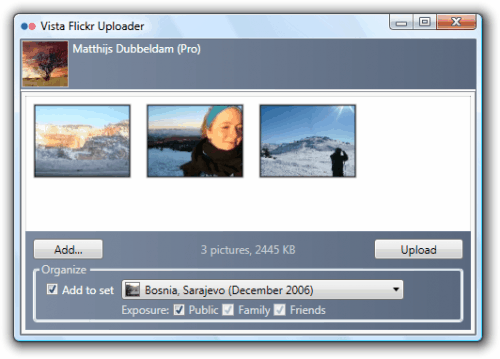 Several images can be selected and uploaded at once. Each image is shown as a thumbnail in the program window. Permissions can be set so that only a certain group can access the pictures and it is possible to select one of the existing sets to add the images to it.

Update: Please note that the program has not been updated since 2010 which may mean that it is no longer working properly. I suggest you try the program first if you like its functionality, and if it does not work head over to Flickr's own Tools section on the official website to download the official desktop uploader for Windows from the site.