USB Image Tool is a lightweight portable software that can create backups of USB devices. It detects pretty much every USB device that I'm connecting to an USB port including my Apple iPod Nano. It did however not detect my mobile phone that I connected to the computer as a test.

The main interface consists of three buttons for the restore, backup and rescan functions. The rescan button is helpful if an USB device is not automatically recognized by the application which is the case when a card is changed in a card reader.

The data of the USB device is stored in a compressed format on the hard disk of the computer from where it can be burned to disk for safekeeping. The software does not only come with an option to backup USB devices to create USB images but also to restore them. It would be possible to backup the data of your iPod and later restore that image again. I'm not sure but it could work to replicate the data on another device of the same kind. 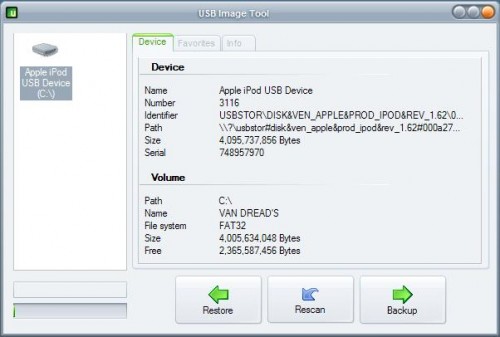 The USB Image Tool requires the Microsoft .net framework 2.0 and a computer running Windows XP or Windows Vista. It ships with a dll called usbit32.dll that has to be in the same folder as the application, which it is by default.