Samer reviewed a wonderful software at his website Freeware Genius today called Album Art Downloader and I would like to take the opportunity to review it as well. When I looked at my mp3 collection the other day I realized that several songs were not properly tagged and that some cover artwork was missing as well. There always seems to be something missing no matter how hard I try to keep everything up to date. I usually manage the collection once every other month and not when a new song or album is added to it.

If you ever tried to find a good program that could download most cover artwork automatically then you know that such applications are hard to find. Apple's iTunes unfortunately does not embed the artwork properly into the songs which makes it pretty useless unless you use a program to export the artwork.

A better solution is the Album Art Downloader. It basically scans a folder, and its subfolders, for mp3 files and checks if they contain an jpg with an appropriate name, cover.jpg for instance. It assumes that the jpg will contain the cover artwork and skip that song or album. Every album or mp3 that does not contain such an image will be listed and can be added to a queue later on. 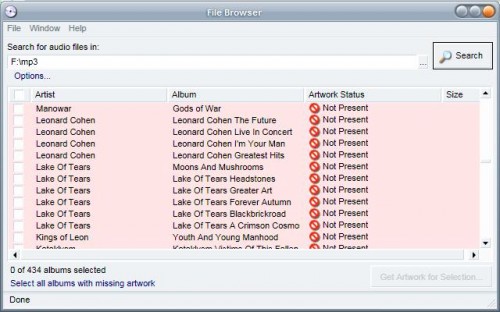 A semi-automatic process begins after adding the desired mp3 files to the queue. One album or song will be selected from the queue and several web databases will be searched for cover artwork of it. Among the databases are several Amazon stores, Google Image and several other online shops and free websites.

The handling afterwards feels a bit awkward at first. The discovered covers of the album are displayed in a separate window and the user can hover his mouse over an image to see a larger preview of it. A click on the disk icon next to each thumbnail saves the image into the folder of the album. The windows has to be closed in the end which will spawn a new window if at least one album is still in the queue. 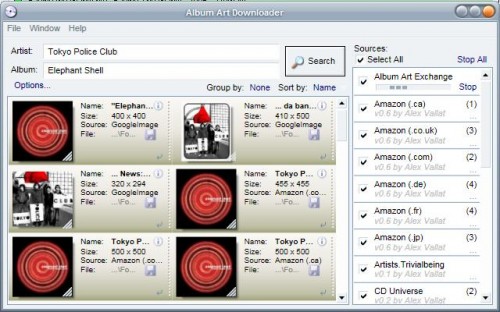 It's more or less pick and close all the time which can become boring pretty soon if you have hundreds of albums that need cover artwork. The program seems to hang sometimes, at least it appeared to on my computer but it always recovered from this later on. It does seem to have a bit of a problem with samplers. I witnessed it two times that it displayed each individual track of a sampler as an individual album.

I agree with Samer that this software definitely needs a function to integrate the cover artwork in the tags of the mp3 files as well. Its still a very nice application, well worth a try.