I recently stumbled upon a series of video game reviews called Zero Punctuation over at the Escapist Magazine which could probably described as reviews on speed. Yahtzee Croshaw, the guy doing the reviews, was apparently born with the talent to talk pretty fast which he is doing in those reviews that usually last between three to five minutes.

There is also no ingame footage but great drawings that visually explain what Yahtzee is talking about at the moment. I personally think that his reviews are often up to the point and really funny to watch and listen to. It is nothing for children though considering the language used in the reviews, but if you are an adult gamer, you may enjoy Yahtzee's sense of humor.

I decided to embed a few of his latest reviews, those of Half-life 2 Orange Box, Bioshock and Halo 3. All others can be viewed by following the link at the end of this article.

Update: I had to remove the old videos as Zero Punctuation apparently changed the embed code some time ago which turned the old embed code into something that does not work anymore.

The video above is the latest review that has been posted on Zero Punctuation at the time of updating. It is a review of Halo 4 for the xbox 360, a much acclaimed gaming series for the system. Like always you get the good and the bad in 5 minutes and 20 seconds. 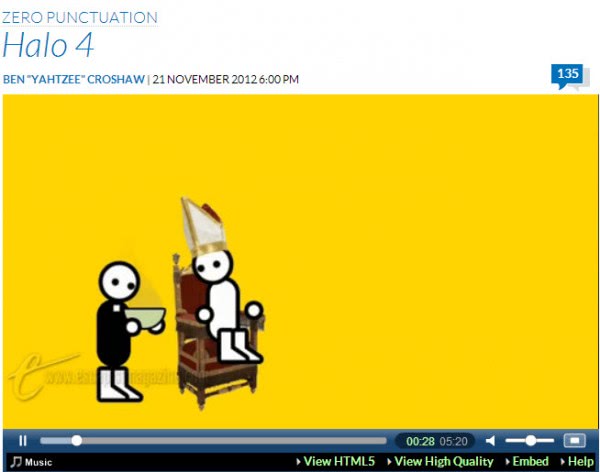 The Zero Punctuation game reviews are without doubt not after everyone's taste, but Yahtzee has quite the following as you can see from the comments that are posted by users every time a new game review gets posted on the site.

A new review seems to get published each week, with a large catalog of previous video reviews being listed on the same page. If you like the reviews, you will probably go through quite a few of them.

You may not always be of the same opinion but most of the arguments made are quite reasonable.

ADVERTISEMENT
Summary
Article Name
Zero Punctuation video game reviews
Description
Zero Punctuation is a video review series that does not take itself too serious but may match your personal opinion of PC and video games more often than not.
Author
Martin Brinkmann
Advertisement