Unlike most commercial developers the freeware gaming scene is always good for a surprise. Tower of Goo Unlimited is such a pleasant surprise. It is a small game that does not have to be installed at all. The task is to build a tower of goo by connecting drops of goo that stick to each other.

Gravity plays a huge role in Tower of Goo. The players main task is to balance the sides of the tower to make sure that no side is dragging the other side to it which results in a lower tower of course.

The drops seem to be unlimited, falling from the sky to the ground and quickly climbing up the structure that you already have build.

A left-click selects a drop which can then be used to support the structure by connecting two drops that are already in place. This is one of the games that I really like. Just jump in, play a few minutes, relax and leave it afterwards. Ideal game for a short break. 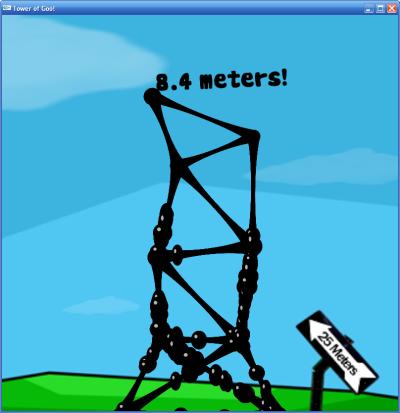 Update: The game does not seem to be offered on the official website anymore. We have uploaded the latest version to our own server. You can download it with a click on the following link: Tower_Of_Goo.zip

Note that we do not support the game in any way.

Tower of Goo is a bridge building game in which you pick up little blobs of goo to build a bridge of sorts. Lines are automatically drawn between two blobs of goo that you place. When you click on a blob and drag it around you will automatically see locations where you can drop it off to. You can place it as a single span between two existing points, or two spans for a new point connecting two existing points.

There is no goal to reach in the game, other than to build the biggest tower or bridge that you can using the elements the game provides you with. You can keep score of that as the game highlights the height in meters that you have achieved.

It is definitely a fun little game for Windows.