I'm playing Team Fortress 2 for a while know and thought that it would be nice to share the knowledge and expertise that I gained while playing the Beta of Team Fortress 2 with players who just got the game recently.

I therefore compiled a list of tips and tricks describing certain aspects of Team Fortress 2 that make the game more enjoyable and your character more competitive when competing against other players and teams online.

If you have more tips post them in the comments. This is not a complete collection of course but contains some good pointers for beginning Team Fortress 2 players. 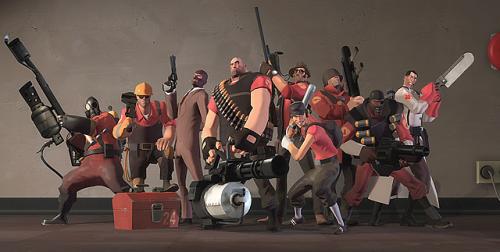 Activate Fast Weapon Switching in the options to switch the weapons faster when using the mouse wheel.

A good teamplayer selects a class that is needed to play in a certain situation. That means you do not start as Sniper if your team already has 4 and no Engineer at all.

You can almost walk through team members, if you meet someone that is blocking it is most likely a spy.

Hitting or coming close to an invisible spy reveals his location for a short time.

Water stops the flames if players have been hit by a Pyro if the character can swim in it. As does a Medic Gun and a Dispenser. This

A medic boosts health of the player that he hits his medic gun with by 150 Hitpoints.

Overcharge fills faster when healing injured team members. Use this to your advantage on maps where you have to wait 50 seconds before they start by healing either a Demoman or a Soldier who do Rocket / Bombjumps. Overcharge will be ready when the map begins, switch to a heavy then.

Use Rocketjumps and Bombjumps to reach roofs or places that other players can't. This includes the houses in Gravelpit, the hole when entering the base in 2Fort or the balcony in 2Fort.

A good medic is able to make two players invulnerable with his medic gun by pointing it to each player alternately.

Don't place Sentries, Dispensers or Teleporters in places that can be seen from a distance. This way everyone can take them out from that distance without getting hurt at all. The best place is behind or under objects.

A sentry gun can kill the Engineer who build it if he stands in the way of the rockets and bullets.

Pyros are less effective when running after someone.

Spies always use a nickname of the enemy team when disguised. Use this to your advantage

Spies: First the sentry, then the Engineer. (Attacking the Engineer reveals the true colors of the spy which means the Sentry gun will attack him.

Use your sapper while in disguise as a spy. Remember to change classes that you disguise as frequently.

Don't disguise as classes that are either faster or slower than a Spy. This means no Heavy, no Soldier, no Scout. No Medic as well because it becomes obvious that you are a spy if you do not heal someone that requests it.

Engineer: First the Sentry, then the Dispenser. Reverse order in Sudden Death games unless the enemy is know for rushing your base.

Engineer: Build Teleporters. Start when the map begins by placing an entrance next to your base, run back in to get your metal filled up and continue. Move Teleporter entries and exits frequently if the situation changes.

Engineers: Hit anyone coming near your position, it could be a spy. Remove sappers and repair Sentries and other equipments with your Wrench. A good hit with the Wrench can kill a spy.

Don't try to kill something from the distance with a Heavy. You crit far more often when close by because of the immense amount of bullets in your gun. Hit Sentries from close range only.

Heavy: A Medic is your best friend. Treat him better than your gun. That means have an eye on him and kill everything that attacks him. Use your body to block enemy bullets from reaching your Medic.Know when to retreat.

If you are injured and near your own base go into the cabinets in Resupply to heal completely.

Snipers do more damage when the lightning symbol is fully charged.

The Demoman is the best character to defend. Place sticky bombs around a capturing point or entrance / exit / way to stop the enemy advance

If the enemy is charging in with overcharge hide and concentrate on damage reduction. Try to hit other enemies that are vulnerable

The Scout is mighty powerful. They can take down Heavies with some shots from their Scattergun if close by.

Use the Double-jump ability to reach areas that other players can't reach from there. An example is jumping from the bridge in 2Fort to the enemy balcony which is actually the fastest way in and out of the base

Pyros are great in buildings and winding hallways. Also great when a lot of enemies are standing in one place, e.g. when capping. Most players flee when they are ignited.