I wrote about some real heavyweights the last Fridays which is why I would like to write about a pretty interesting flash game today. Treasure of the Cutlass Reef is a game that reminded me a little bit of the oldschool Pirates on the C-64 back in the time when wonderful games would fit on a disk that had storage capacities of less than one Megabyte.

The basic task of the player is to reach the Treasure of the Cutlass Reef by beating enemy Pirates and their Armadas that try to stop him from reaching the Treasure. What makes this game stick out is the fact that you can upgrade your ship after each victory. This requires some basic strategic thinking: Do I add more Pirates, more cannons or want a faster ship ?

The battles are much like those if Pirates on the C-64. Your ship starts at the bottom of the screen and enemy ships appear at the top. Unlike Pirates however the screen does not scroll at all and your ship can't reach the top of the screen. This is probably the only aspect of the game that is not that well done. 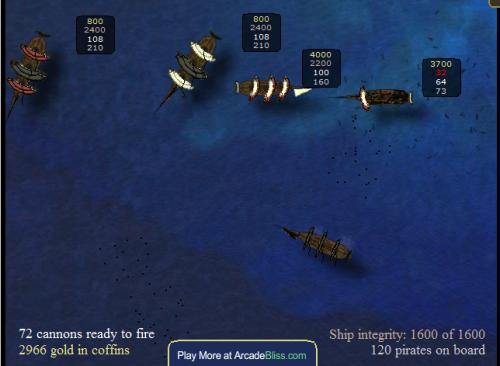 Graphics are well done and the effects are nice as well. The game becomes extremely difficulty at the end because a lot of enemy ships enter the battle at the same time all with more men and cannons than your ship.

It is possible to save the game after each battle which do not last longer than 5-10 minutes each.

Treasure of the Cutlass Reef