Poizoned Mind is an entry to the B-Game Competition held at The Independent Gaming Source which, judging from the looks of it, seems to be one of the better games of the competition. It reminds me of those classic adventures like Guild of Thieves and The Pawn which were among the first to combine text with beautiful images to support the story of the adventure.

Unlike those aforementioned adventures Poizoned Mind uses multiple choice to interact with the environment. You step out of the train, poisoned, greeted by Death himself asking if you are ready to come along. And so the adventure unfolds. You don't want to die, just yet, don't you ?

Talk to Death and other characters about Life, Death, Transition and other aspects of life. Some dialogs add new topics to the multiple choice options which will lead you deeper into this adventure. You have to be very careful though what you do because one wrong step and Death takes you with him. 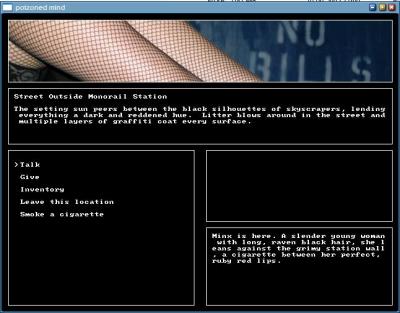 Poizoned Mind has a subtle humor which works perfectly with the setting of the game. And, you meet the King. If that is not enough to try it out maybe the size of only 2 Megabytes and the fact that it does not need to be installed does the rest.