XdN Tweaker is not one of those usual tweaking programs that give you access to change hundreds of Windows settings in one tiny menu.

This one is different, and you will notice that right when you start it up. It concentrates on only a handful of tweaks that are not so common and supports Windows Vista, Windows XP and Windows 2003 both 32-bit and 64-bit versions and needs the .net framework 2.0 as well (Update: also compatible with all recent versions of the operating system).

Let me mention a few tweaks that I found useful: It is possible to change the number of folder views that Windows remembers. Windows XP for instance has a limit of 400 folder views which can be raised to the Vista default of 5000 for instance. Folder Views are folders with your personal folder settings. If that cap is reached the default folder view will be used instead. 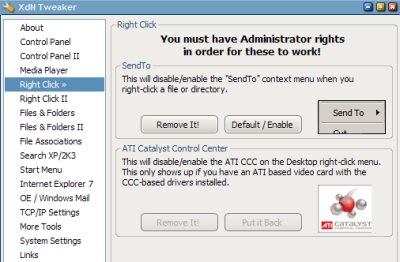 Here are several other features that I found useful:

Update: The developer has released updates throughout the years that ensured compatibility with newer versions of the Windows operating system. As far as I can tell, the program has not changed that much with the exception of a couple of new features and some removed features (Windows Mail).

One of the useful additions is a Folder Fix that will set your selected default viewing mode, e.g. details or thumbnails view, for all folders bypassing any special folder preferences that Windows may apply to folders automatically.

Update 2: The last version was released in 2013. That's why Windows 10 is not listed as a compatible operating system even though it is compatible with the program. Some tweaks may not work though so keep that in mind when you are running the program and create backups prior to making changes.

XnD Tweaker offers a specific set of tweaks and features that you can apply to your operating system. You should not expect it to make available hundreds of new features though, but the tweaks it offers are helpful in a lot of situations.