I decided to uninstall the old CCleaner version that I had installed on my system and replace it with the first CCleaner 2.0 beta version which was released just a few days ago. The new CCleaner version was rebuild from scratch in C++ adding Windows Vista, 64-bit and portable support to this excellent software.

Processes such as scanning and cleaning were optimized as well. I'm not that convinced that the procedure is that faster but it surely is fast enough even if you decide to clean a lot of files.

Let me explain what CCleaner does if you have never heard about this software before. CCleaner is a software that cleans traces on your computer. It can clean cookies in various browsers, website histories, urls, recent documents, software specific traces, temporary files, and several more all with the click of a button.

Next to removing traces of various programs and system activities, CCleaner can also scan the Windows Registry as well and delete information using secure file deletion processes. It searches for orphan or corrupt entries for example in the Registry.

I like the fact that it is possible to use CCleaner from an USB stick which means that you can take it with you and execute the software whenever you are finished working on a public computer. 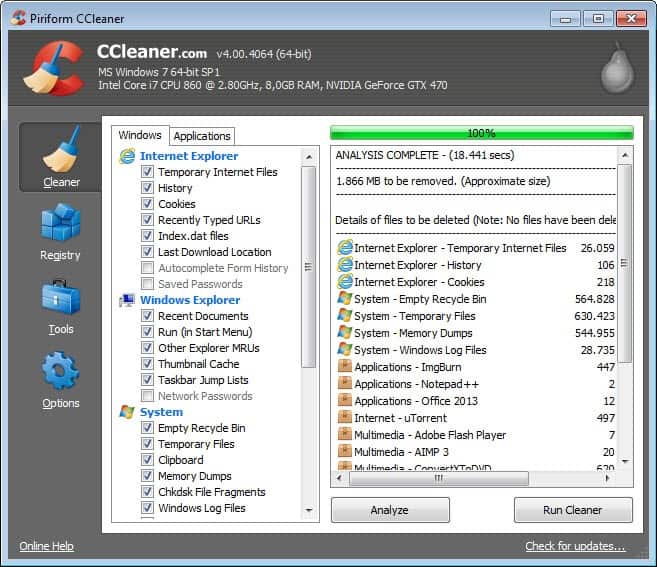 Update: CCleaner 2.0 final has been released and is now available for download. Users should receive automatic update notifications when they run the program the next time.

Update 2:Piriform, the company behind CCleaner has moved on and released several updates in the past years. CCleaner is now at version 3.28 at the time of writing. Several new features have been introduced in the latest program versions including support for Microsoft's recently released operating systems Windows 7 and 8, support for new web browser versions, and support for new software programs such as Office 2013, Adobe Reader 11.0 or Google Chrome extensions.

Martin Brinkmann is a journalist from Germany who founded Ghacks Technology News Back in 2005. He is passionate about all things tech and knows the Internet and computers like the back of his hand. You can follow Martin on Facebook or Twitter
View all posts by Martin Brinkmann →
Previous Post: « XdN Tweaker for Windows
Next Post: Windows Vista Sidebar Styler »