Roman commented on my article about removing fonts to improve system startup speed yesterday mentioning the free software Font Frenzy which can remove all non system fonts with the click of a button.

This is way more elegant than the suggested manual way that I came up with yesterday which is why I would like to write about Font Frenzy today.

A quick recap: Fonts slow down system startup. The difference between 1000 and 100 installed fonts is almost 25 seconds which is huge. Windows XP installs 44 fonts and all other fonts are added by other applications such as Microsoft Office, Adobe Photoshop and Gimp.

These fonts can be quite useful, considering that you can use them in any application that can load fonts installed on the system. The negative aspect is the impact on a system's boot time. 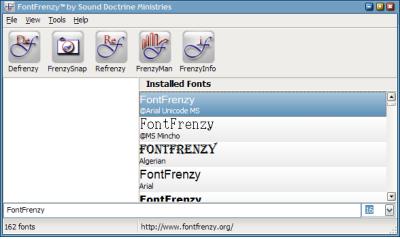 Besides offering the ability to remove all non system fonts in Windows XP which is called DeFrenzy in Font Frenzy it offers the functionality to make a snapshot of your current fonts and backup them.

Font Frenzy is a font manager which displays all fonts in a list giving you options to install, delete, add new, unload and view the selected fonts. What I really like about Font Frenzy is that it does not need to be installed and can be run from any location on your hard drive.

The program has not been updated since 2010 which may mean that it is not compatible with newer versions of the Windows operating system. While that may prevent some features from working correctly, like the automatic removal of non-system fonts, other features like the ability to uninstall fonts individually or preview fonts installed on the system, will still work properly.

One interesting feature that Font Frenzy offers is to create a snapshot of the fonts folder so that it can be restored at any time in the future. This can be quite useful to reduce the number of installed fonts on the system again without uninstalling important system fonts in the process.

Whatever you do, make sure you create a backup first before you start to remove fonts or other features of the application so that you can restore a previous state if things do not work out as planned.

Update: The developer homepage is no longer available. You can download the latest version from third-party download sites such as Major Geeks.