Which organization is editing Wikipedia entries ?

Most articles on Wikipedia can be edited by all users which may not only entice many to contribute, but also opens the door for manipulations. Organizations, companies or individuals may try to alter or edit articles based on their beliefs, and since it is that easy to do, it is quite common that this is happening.

It is however not that easy to determine if an article has been altered by someone on behalf of an organization. Wikipedia records IP addresses and information who edited an article may be important in assessing its quality and reliability.

A basic example would be if company A tries to manipulate entries from company B to put it in a bad light, or if a politician attempts to remove several information from his party Wikipedia entry or his own.

Wikiscanner is an ongoing effort to bring light into the darkness of Wikipedia article changes by offering a way to search more than 34 million Wikipedia edits from February 7th, 2002 to August 4th, 2007.

Several methods are offered to search the database:

It is also possible to access so called Editor Picks which offer information about the Democratic and Republican Party, Diebold Inc., most common .mil and .gov domains, and CIA. There is more to explore and some finds are really interesting.

This is basically an IP lookup script that checks if a certain IP range that can be connected to an organization that did edit an Wikipedia article.

Wikipedia saves either the username if the user is logged in or the IP address if someone not logged in makes a change. All those information can be downloaded from Wikipedia and then used to analyze who - or better which organization - was editing the articles.

Update: Wikiscanner is no longer available as a public tool. An Open Source version of it has been released that is available on the Wiki Watchdog website. Here you need to enter an IP address or domain name to get a list of all Wikipedia entries that where modified by people using it. 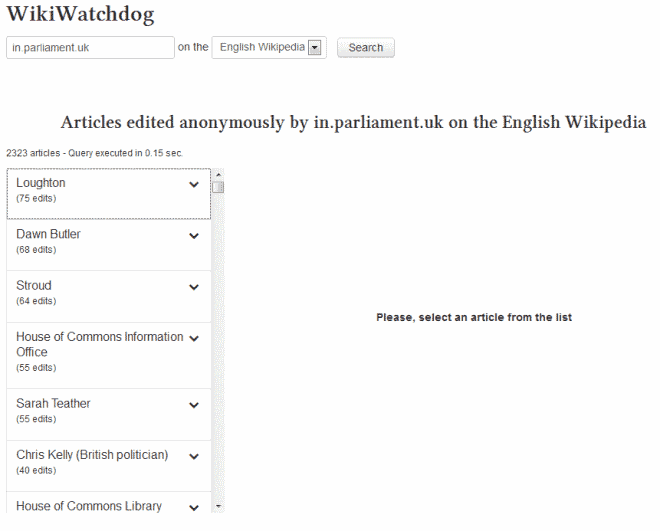 You can select an article from the list on the left to get a list of all modifications that have been made to the article.

Previous Post: « News Ticker Style RSS Feeds
Next Post: Google Bot has privileges, or, how to browse the Internet as Google's Bot »