RSS feeds in OPML format can be imported into the software which is great if you are already using another service such as Google Reader or Netvibes to display your feeds online. You do need to export the feed listing though from those services if you plan to import them. The news order of the RSS ticker can be set to chronological, alternating or random.

If you do not have OPML data you can add single feeds to FeedLiner with ease. Folders and different colors change the layout of the feed catalog which is helpful if you have a lot of feeds. 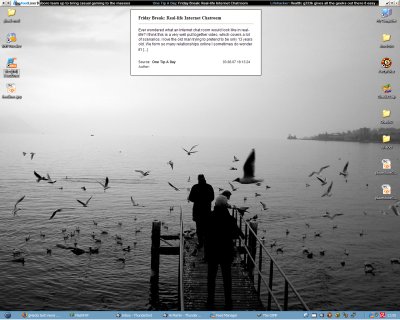 A little bit strange is that I found no way to delete the default categories and feeds that come preinstalled with the software. Most of them are in Czech which should only appeal to a handful of users who read this article. If you find a way to delete those folders and feeds let me know please.

It is also possible to increase the size and the speed of the news ticker. Hovering your mouse over an entry displays that entry directly as an overlay which is really nice if you want to quickly read something.

Feedliner is a unique rss reader distinguishing itself from others with its rss ticker display.

Update: The developer website and the program itself are no longer available. We have reviewed alternatives in the past. This includes Feed Roller and Desktop Ticker which can display news feeds in ticker style on the desktop.