Install Ubuntu without partitioning with Wubi

Many novice users fear the technical process of installing Linux for the first time on a computer system. This includes the preparations that have to be made, the actual installation of Linux on the system, and the configuration after Linux has been installed.

Partitioning is something that most are not familiar with and the fear to do something wrong and wreck their standard operating system is probably one of the main reasons why many users do not install a Linux distribution. That is of course if Linux is not installed on a freshly formatted system without any data on it.

Wubi is a sweet little program that lets us install Ubuntu - or Kubuntu, Xubuntu and UbuntuStudio - without partitioning your hard disks at all. "Wubi adds an entry to the Windows boot menu which allows you to run Linux. Ubuntu is installed within a file in the windows file system (c:\wubi\disks\system.virtual.disk), this file is seen by Linux as a real hard disk."

So, the main difference is that Ubuntu is installed into a file instead of its own partition which is a great way to test the Linux distribution without having to partition your hard drives. Ubuntu is not running in a virtual environment at all, this is a real installation. The Windows boot manager will give you the choice to either boot Windows or Ubuntu at every startup from then on.

It is also easy to uninstall Ubuntu again by simply using the Add or Remove Programs dialog in Windows. 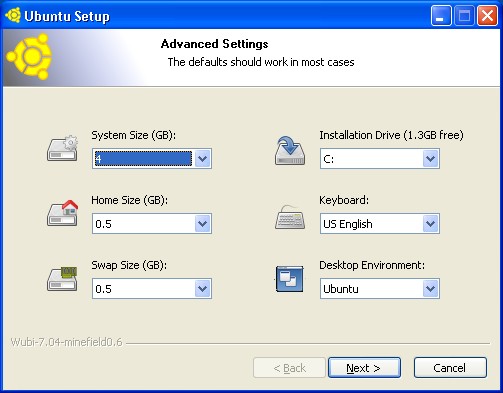 I can't think of an easier way to try and test Ubuntu on your computer without installing it. Live CDs are nice but I personally do not like to play disk jockey whenever I want to try the Live CD. Wubi is working extremely stable although it is currently in beta.

Update: Wubi is now an official part of Ubuntu that Windows users can download to install Ubuntu on their systems. It is now available on the official Ubuntu website and no longer on a separate domain. We have edited the link to reflect that.