Back then when I started writing articles for Ghacks I reviewed a freeware game that blew my mind away. Mono offered a fascinating experiencing mixing an action-orientated arena shoot em up game with pumping beats and an intense game play.

It was simple to learn but very hard to master and that is probably what appealed to me the most.

The creators of Mono developed a new game which is called Echoes. It uses many of the game elements that made Mono great, but mixes them together in a different way.

Echoes is an Asteroids clone on steroids. That is probably the best way to explain the basic principle of the game. The developers put it this way when they describe Echoes: "Yeah, it's a bit like Asteroids hyperactive, drug crazed brother displayed in blur-o-vision and viewed through psychedelic sunglasses in a cheap nightclub." 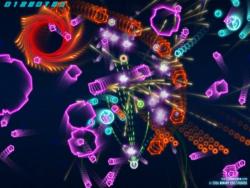 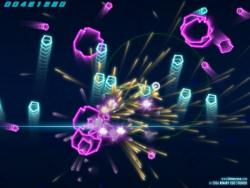 Echoes is freeware game and has a size of about 8 megabytes packed. You can run it from any location. Once started you move your spaceship with the mouse and use the ASDW keys to point the gun in one of the four directions available. The first waves of asteroids are no problem and some leave power ups behind that replenish shields and improve the guns of the ship so that you shoot more bullets at the same time for example.

Echoes is probably not as addictive as Mono - nothing beats Mono, you know - but it comes pretty close. It has nice visuals, a good smooth game play and action that changes and gets faster with every asteroid that gets destroyed. Take a look, you will enjoy it.

Update: Three revisions to the original game were posted. The developers have added more contents, like the "crack" game, an instant replay feature and other new features, They have fixed several bugs in the game. The game is available as an eight Megabyte download on the developer website. It requires a video card that is compatible with DirectX 9.0b or higher.

Previous Post: « NullDC a new Dreamcast Emulator for PC
Next Post: « Wii outselling PS3 in Japan Three to One