Game for the Weekend Ballistic

Ballistic is an addictive 3D maze type of game that reminds me a little bit of games like Marble Madness. The game Ballistic however brings some new elements to the "move ball to exit" type of game. First, the environment is fully 3D compared to the two dimensions of the other games. Second you do not move the ball(s) but the complete level and the ball just follows the laws of physics.

The screenshots are not able to show you how great the game is, you will have to download and play it by yourself to come to this conclusion. Ballistic is a race against time to reach the exit of the level before the clock runs out.

All kinds of obstacles are placed along the road to the exit, those include bumpers, blockers and others that have various effects on your ball. Bumpers for instance work like pinball bumpers, if the ball hits them it will recoil. 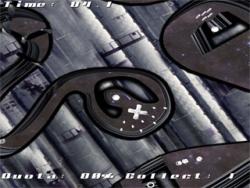 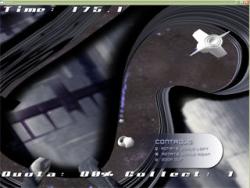 Ballistic is a 3D-action puzzle game. Viewed from a side perspective, the game asks players to solve physics-based challenges within a given time limit. Sporting tons of flash and making use of the Novadex physics SDK, Ballistic is non-stop fun that is easy and intuitive to get into.

Update: You are probably wondering about controls and such. You can play the game either with your mouse, or with the keyboard. To rotate the the map use the right and left mouse button, or the left arrow and right arrow keys on the keyboard. You can also zoom , and with the scroll wheel, and use the space bar to bump the map.

The game has a size of 40 Megabytes, and should play fine under all recent versions of the Microsoft Windows operating system.

Update 2: The game is no longer available for download. I was not able to find it hosted anywhere else on the Internet. Leave a comment below if you know of a public download location for it.