Green Beret, Wings of Fury and Ghouls and Ghosts - if those names ring a bell you have come to the right place. Everyone else join us as we delve into a time where some of the greatest games of all time were produced.

The motto of the 2006 Retro Remakes competition is "Good remakes of good games that anyone can play, regardless of their ability". I think this is indeed a great opportunity for old folks like us to enjoy those games we played when we were young and for young folks to play games that they probably never heard about before.

Without further ado I'm going to present the games that I enjoyed the most that were submitted for competition. All games are free to download and play without registration hassles. Have a nice time and let me know if you found another one that is worth mentioning or if you enjoyed one tremendously. 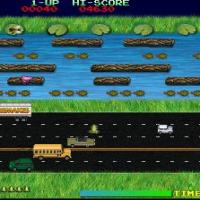 Do you remember the game Frogger? It was developed by Konami and made its debut in the arcades in 1981. It was ported to many systems including my first video game system the Atari 2600. Sega created an unofficial sequel called Ribbit which explains why the game is called Froggy Ribbit.

The task of this game is pretty simply. You are a frog starting at the bottom of the screen wanting to reach home which happens to be at the top of the screen. A motorway with nasty cars and a river with floating wood are the main obstacles that need to be crossed to reach your home safely. You do loose a life if you are hit by a car or drop in the water. The ultimate goal was to occupy all five homes with your frogs. 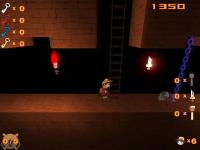 Montezuma's Revenge is a platform game that has its fair share of jumping, puzzle solving and treasure hunting. It was a great success when it first came out. 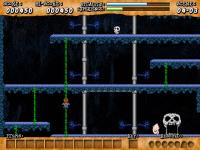 Whenever a successful movie hit the movie theaters a game was shortly after produced and released to benefit from the popularity of that movie. Many times the games were bad, real bad but sometimes games would come out that would stick out and would be fun to play.

The Goonies was developed by Konami once again and it involved five stages of jump and run action. After each stage a keyword was given to the player which could be used to continue the game from that stage on. 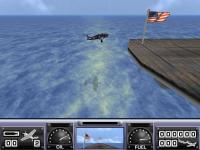 Wings of Fury is a game set in the Pacific during World War II. You are a US pilot on board an aircraft carrier of the US Navy. Your task is to defeat the Japanese war machinery by bombarding bunkers, turrets, battleships and soldiers on the ground.

The machine is equipped with torpedoes, rockets, bombs and a machine gun which had to be replenished on the carrier. The player also had to take care of the fuel of his plane. Wings of Fury was a violent game at this time and created some controversy. 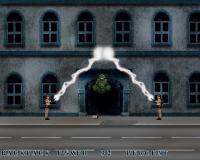 Again a game that was produced because of the highly successful movie. It was not the usual arcade game that most movie adaptions would become but a game that had some nice twists. You had to buy equipment like traps or upgrades for your vehicle with the money that had been earned from catching ghosts. 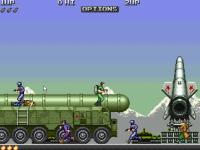 Green Beret, also known as Rush'n Attack was a side scrolling arcade game developed by Konami. The player takes on the role of a member of the United States Elite Force trying to infiltrate an enemy military base to destroy the enemy's secret weapon.

Throughout most of the game the player is only using his knife to defeat enemy forces and finds the occasional power up - handguns, grenades, bazookas - which aid him in his quest to destroy the weapon.

Ghouls and Ghosts is one of those game series that existed for a long time but still make a appearance in remakes of the original game. You control the knight Arthur whose task is to restore souls, including the one of this bride, by defeating Lucifer himself.

Arthur may find different types of weapons while he advances in the six levels to finally meet his adversary. Great game and graphics. 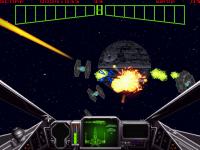 The dream of every Star Wars fan came true with the release of the original Star Wars game. Be Luke Skywalker, defeat T-Fighters, attack the Death Star and finally destroy it by flying the same path that Luke did in the first episode of Star Wars.

I'm not sure about the original game which the coder used to make this remake, if you know please let me know. If you are a Star Wars fan this remake has been made for you, enjoy it while you can. 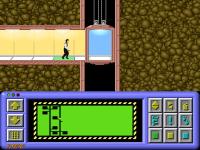 Another visitor. Stay awhile... staaaaay FOREVER! This line spoken by the evil professor Atombender was one reason why Impossible Mission became such a successful game. Epyx, the creators of Impossible Mission were one of the most famous companies that produced games for the C-64 including other smash hits such as Winter Games and Summer Games.

The player has to find password pieces in furniture that are guarded by robots. Once in possession of all pieces he would need to assemble them and use them in the control room.